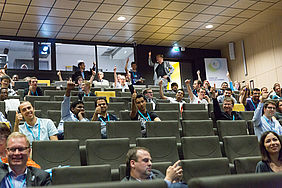 The Symposium brought together big and small companies, startups and researchers to talk about business opportunities in the Cloud. It also hosted the EIT ICT Labs Idea Challenge final on Future Cloud during which nine startups pitched in an open session.

On 23 and 24 June, Rennes hosted the EIT ICT Labs Symposium on Future Cloud Computing. Nearly 250 people from all over Europe (and beyond) gathered to discuss about the opportunities and issues raised by this technology that has experienced a massive growth in recent years. Big data in the cloud, privacy and security, and the economics of the cloud were the main issues discussed during these two days.

The Symposium was an opportunity to bring together big and small companies, startups and researchers. Speakers included representatives from EIT ICT Labs, leading academics from INRIA, IRISA, TU Berlin and U Neuchatel, entrepreneurs from Europe and the USA, and industry leaders such as Microsoft, Google and Thales.

The event was locally organised by the EIT ICT Labs Satellite Colocation Center in Rennes, INRIA, University of Rennes 1, Institut Mines Télécom, and IRISA. The Future Cloud Symposium also hosted one of the eight finals of the EIT ICT Labs Idea Challenge.

The videos from the Symposium talks and Idea Challenge pitches are now online on the EIT ICT Labs YouTube channel.

For a snapshot of these two days, take a look at the Symposium photo album.