EIT ICT Labs at CeBIT 2015 with startups and experts 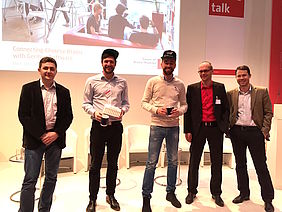 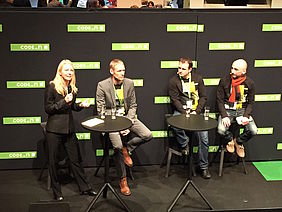 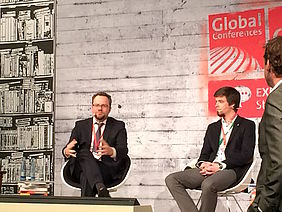 Blogger surrounding Stefan from Athom with their product "Homey"

More than 5,000 innovations from all over the digital world were lined up at this year’s CeBIT, one of the biggest IT B2B trade fairs of the world. The important role of digitization and innovation as driver of small and big companies was highlighted by the lead theme d!conomy. It describes the digital transformation shaping our everyday lives through big data, cloud, mobile, social and security matters. In the spotlight were 350 startups, accelerators and investors.

EIT ICT Labs presented 19 coached European startups at CeBIT 2015. They showcased their ideas and ways of commercializing them at the CODE_n and Scale 11 halls, on stage of the Future Talks (DFKI) as well as at Future Match- an international brokerage platform organised by the Enterprise Europe Network (EEN). The Future Matches were part of a Europe-wide matchmaking collaboration that EIT ICT Labs and EEN kicked-off on March 17. It has the goal to establish a close cooperation between the two networks. This agreement will ease the exchange between startups and international business partners on a European level. For instance at CeBIT about 65 meetings were organised between EEN contacts, BDA business developers and 10 startups from EIT ICT Labs.

At the IT trade fair, expertise in innovation and entrepreneurship were not only demonstrated by the startups, but also on stage by EIT ICT Labs experts: Dr. Udo Bub, Node Director of EIT ICT Labs Germany, Magnus Melander Internet of Things (IoT) expert as well as by Business Developer Agneta Jacobson. Udo Bub discussed with a panel of 4 other IT representatives on the influences of d!conomy at the Global Conference. He emphasized on the necessity of defragmenting the European market; so, entering new markets becomes easier for startups. Also, he underlined that Europe needs to enhance the funding framework for startups; otherwise, they might realign themselves too much in markets abroad like the US. Magnus Melander discussed on stage of Code_n why IoT is happening now and among other topics presented the key deliverables of IoT. He also explained why service enablers and prototyping are key tools for anyone who wants to utilise IoT. Agneta Jacobson moderated a special fireside chat of Code_n about promising IoT business models and the myriad opportunities and challenges offered by IoT for various industries.

Clearly a highlight was the InnovationSlam on stage of the Future Talks at the last days of CeBIT 2015 that was won by the EIT ICT Labs coached startups and Idea Challenge winners CHINO (Privacy Security & Trust) and 3YOURMIND (Cyber-Physical Systems) as well as the Innovation Activity FLASHPOLL. They won tickets to the Heureka startup conference on May 5th in Berlin. The EIT ICT Labs coached startup Infozone presented their story in a video.