EIT ICT Labs and EIT have signed the 2013 Grant Agreement 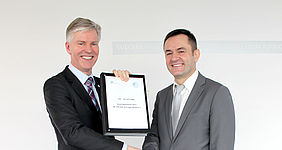 2013 is getting off to a promising start following the timely signature on 15 February 2013 of the grant agreement between the EIT and EIT ICT Labs.

The so called ‘annual grant agreement’ between the EIT and the KICs outline the financial contribution of the EIT to each KIC and entail the commitment of the KICs to deliver on activities during the course of 2013 against the framework partnership agreement signed in 2010 after the designation of the three KICs in 2009.

Time to contract between the EIT and EIT ICT Labs has this year reached less than five months. Following the submission of the EIT ICT Labs business plans at the end of September 2012 and their evaluation thereafter, the contract has now been signed enables EIT ICT Labs to focus on the delivery of their wide range of activities presented in the 2013 business plan. José Manuel Leceta, EIT Director, says that “This shortened time to contract represents a significant progress and also reflects the EIT’s and KIC’s constant commitment to continuous learning and improvement.”

“The signing of the 2013 annual Grant Agreement again earlier than last year is a clear indication that the EIT and EIT ICT Labs are further professionalizing” says Willem Jonker CEO EIT ICT Labs. “The Grant Agreement 2013 allows us to continue working towards our mission, which is driving European leadership in ICT innovation for economic growth and quality of life.”