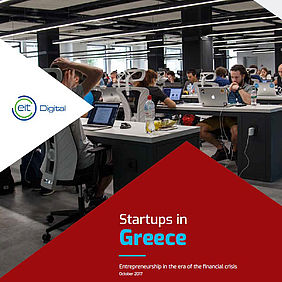 The report provides a valuable scope in the Greek startup ecosystem, highlighting potential opportunities for investment and growth.

The report is a study of the state of Greek startups in relation to the country's financial situation, that lists the top 10 funded startups in Greece, as well as the top 10 in terms of successful exits. The report provides a valuable scope in the Greek startup ecosystem, highlighting potential opportunities for investment and growth.

A number of accelerators, incubation spaces and co-working spaces are also documented, as an important part of the Greek entrepreneurial ecosystem and its potential for future developments.

By identifying the most successful Greek startups, the report aims at drawing attention to the country's national entrepreneurship ecosystem and thus helping to develop the Greek economy through investment in innovation and communication between the respective players - entrepreneurs, academics, politicians and established firms.

Found.ation has been keeping record of the majority of Greek startups evolution, many of which have started their path on the company's co-working space or have been supported in a multitude of ways. To finalize the research, Found.ation analyzed over 300 transactions, from 2010 to September 2017; those have been tracked in their database or by other sources.

Dimitris G. Kalavros Gousiou, co-founder and partner of Found.ation, commented: "With more venture capital money than ever available in the market, the expectations are high. The Greek society expects this ecosystem to flourish, produce a measurable economic impact, create jobs and amplify a more positive narrative for Greece to the world."