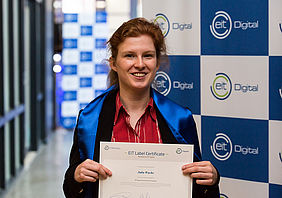 Julia Wache completed a Masters in cognitive science and biology at the Humboldt University of Berlin and the University of Vienna before starting the EIT Digital Doctoral School in 2012. She graduated in December 2016 with the BDE thesis on financing a startup. The title of her PhD thesis is: <a href="http://eprints-phd.biblio.unitn.it/1803/" target="_blank">Implicit Human-Computer Interaction: Two complementary approaches</a>. She received her degree at an official graduation ceremony on 22 March 2017, in Brussels.

Birds, turtles and other animals like fish have a sense that human beings lack: a sense of orientation. Now, Dr Julia Wache, a 2017 graduate of the EIT Digital Doctoral School, has co-founded feelSpace, a company that produces a vibrotactile compass belt that functions as a sixth sense. It helps visually impaired people to orientate themselves and find their way. Thanks to a recent cash injection, the company has increased production and has also come up with a game. Wache and her co-founders are getting ready to take their sixth sense across Europe.

Giving people an extra orientation sense like the one animals have, sounds like a synopsis for a movie or a philosophical question. But ten years ago, researchers at Osnabruck University started to research this question. They found that in addition to the known human senses: sight, hearing, touch, smell, and taste, with a bit of help, human beings could also learn to use a sense of orientation.

For research purposes, they developed a tactile compass belt. The waist is, says Wache, is the most convenient and reliable place to wear such a device. "The neck would be uncomfortable and arms or legs move too much." The belt has integrated vibration elements, equally spaced around the waist. The northernmost element is active constantly. If the user turns, the signal moves around the waist. The belt bearers are therefore always aware of where north is and their position in relation to it. Research, including behavioural and physiological tests with participants, revealed that the belt was especially helpful to blind subjects who can navigate more intuitively with the belt. "People who tried the belt really liked it", says Wache. "Even those who were not visually impaired. Some of them said 'this is so awesome, where can I buy it?' At that time, the belt was not meant to be a commercial product. The first version even looked scary, you wouldn't want to enter an airport with it."

So how did Wache, who always thought she would become a scientist, come to be involved in a new startup? First, she knew the researchers, in fact one of them was her twin sister, and her sister's research intrigued her. She visited her in Trento University where her sister worked on an exchange programme. Here, Wache heard about the EIT Digital Doctoral School. Somehow, the school awakened a latent ambition in her. "I have always had the feeling that I wanted to implement something myself and improve people's lives with it." She applied and got admitted to the ICT Doctoral Programme at the University of Trento, a partner of the EIT Digital Doctoral School.

At the EIT Digital Doctoral School, Wache learned to think like an entrepreneur and to act like one; it turned into a state of being. Her studies in innovation and entrepreneurship at the EIT Digital Doctoral School alongside her interest in her sister's research, led her to ask the questions: Why not turn this significant research into a business? One that can provide blind or visually impaired people with a sixth sense that makes their lives easier? Why not produce and sell the belts? Why not found a startup?

And so, she did. In 2014, Wache designed a business model for her Business Development Experience. The model centred around a startup selling tactile navigation belts that will help blind people navigate and orientate better. The idea was approved by EIT Digital and supported by information from the researchers at University of Osnabrück. She - and her fellow students , came top of the class which allowed them to attend the VT KnowledgeWorks Global Student Entrepreneurship Challenge in Virginia in the US, where they won a $25,000 prize. Wache's business model and the acknowledgement of winning the contest validated her concept and finally led to the founding of the feelSpace company in November 2015.

feelSpace, based in Osnabrück, benefited from German financial aid designed to support spinoffs of universities. The aid covered the salaries of three people for one year. Following this, Wache helped to design and drive a crowdfunding campaign at Indiegogo which raised over $13,000. Additionally, to secure long-term company development, the founders set about trying to find an investor. Here, she really could practice what she was taught in the "Growth and Harvest" course at the EIT Digital Doctoral School. "When we were looking for and talking with investors, I could separate the good offers from the bad. I could sense we could aim for higher figures." In February 2017, the founders succeeded in securing a €600,000 investment from Johannes Busmann of Prowind GmbH.

With this funding, Wache and her co-founders were able to speed up development and started producing the belt in bigger volumes to enter the market. The initial market penetration focused on institutions for visually impaired people. Wache says with pride that they already have their first paying and happy customers. "This means there is a need for our product amongst visually impaired people."

One blind user has said to Wache that she can now go horse-riding and be conscious of where she is, even though she cannot see. And she knows she can find her way back. "The tactile belt gives people freedom, independence and more self-confidence. They can go out, feel free and decide for themselves when and where to go and can be certain to find their way back home on their own."

Using the corresponding smartphone app - connected via Bluetooth - you can enter details of any address you want to get to. Of course, visually impaired people can rely on traditional navigation apps as well, but this usually means listening to a voice on their device. That forces them to focus their hearing on the navigation aids - a sense they'd rather use to focus on traffic and other noises in their surroundings. With the feelSpace navigation belt they are more or less equipped with an extra sense; they can navigate without overloading their other senses. The belt makes life much easier for those who cannot see well or cannot see at all."

Although the primary target audience is visually impaired people, customers with other impairments, like deaf people, or with no impairments at all, can also benefit from this extra sense. Wache says: "Sighted people like to use it to further their ability to orientate and navigate more easily and to fully use their other senses so they have a fuller experience of their surroundings. That makes me proud. The sixth sense is complementary to their other working senses." That is why feelSpace also promotes the belt as an orientation and navigation device to sighted people. "Hikers, bikers or tourists do not want to constantly stare at their smartphones for navigation help while exploring, or be frustrated by excessive sunlight or rain, rendering smartphone displays difficult to read."

Using a sixth sense is no longer a fantasy; it is for sale at feelSpace. The belt is a reality and the opportunity to live with a sixth sense has been made possible by Wache and her colleagues. As far as they know, theirs is the first company to come to the market with an extra sense that is comfortable to wear. Accordingly, Wache has high hopes for the commercial success of the tactile compass belt. "We are en route to make some money."

feelSpace has big plans for the coming year as it continues its development. An important milestone will be launching the iPhone version of the app that accompanies the belt. So far, there has only been an Android app. Also, improvements are in development to further the social inclusion of blind and visually impaired people, particularly into working life, like a voice input for the navigation app. The company's first target market is Germany. "In Germany, we are well connected with the market for visually impaired tools, many institutions for blind people know us already." The European market is the next step, to be tackled in 2018.

In May, feelSpace introduced a new product, called 'feelSpace - The Game'. Here, the tactile belts can be used for teambuilding, and social events in schools or at business events. "This game is about learning to trust one another", explains Wache. One person who controls the app, navigates their blindfolded, belt wearing partner through a labyrinth. The belt wearer feels vibrations either on the left, back, middle or right side of his or her waist to lead the direction. The Game will be officially launched in the coming weeks and it targets a new sector for feelSpace, says Wache, who is now a fully European entrepreneur - heart and soul.