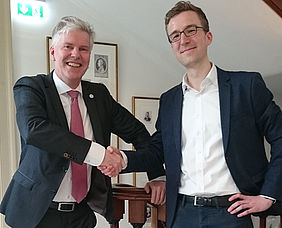 Eindhoven, April 18 2016 - Last Friday, the award ceremony for the internet thesis awards organised by the Royal Holland Society of Sciences and Humanities took place in Haarlem. Moritz Müller, a graduate of the EIT Digital Master’s programme in Security and Privacy, received the thesis award in the ‘Internet and Engineering Sciences’ category.Mr Müller studied at the University of Trento in Italy during the first year of his programme and completed his studies at the University of Twente.

His thesis is entitled: “Sidekick: Suspicious domain classification in the .nl zone” and was written during his internship at SIDN (Foundation for Internet Domain Registration in the Netherlands). SIDN registers and monitors all .nl domain names. He uncovered patterns that were similar for both websites that are used for the distribution of malware and websites used for phishing activities. Based on this analysis, Müller developed an innovative tool he calls Sidekick, which can automatically detect if a particular domain is being used for malicious purposes. Sidekick is the first instrument that can give a clear indication of the risk of abuse of a domain.

Dr Andreas Peter, University of Twente lecturer and thesis advisor explains: “Moritz Müller has shown that EIT Digital works. EIT Digital combines technical education programmes such as Security and Privacy with programmes in the area of Innovation and Entrepreneurship. This Master’s degree and Mr Müller’s thesis are highly relevant to organisations and society. In this way, the University of Twente and the Netherlands will also be able to attract larger numbers of exceptional international students such as German national Moritz Müller. SIDN did not hesitate to offer Mr Müller a job and that is proof that this combination is successful.”

Willem Jonker, CEO of EIT Digital says: “This programme offers a unique combination of courses from top-notch IT degrees and courses on innovation and entrepreneurship. Talented graduates possess the knowledge and experience to take a practical and innovative approach to tackling the challenges that Europe faces, now and in the future. We are proud to announce that we have already had the pleasure of educating 1200 students.”

The ceremony started at 15:00 and was chaired by Professor Alexander Rinnooy Kan, President of the Royal Holland Society of Sciences and Humanities. The awards were presented by representatives from the four sponsors of the award: Google, Brinkhof, SIDN and Greenhost. The fifth prize was awarded by the general public. The ceremony also included two lectures and His Royal Highness Prince Constantijn of Orange made an appearance. For more information about the ceremony go to www.khmw.nl.