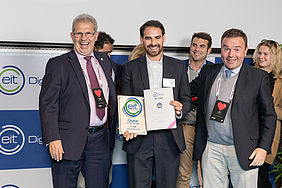 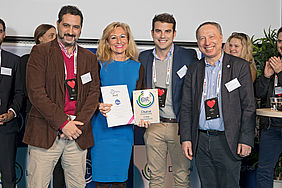 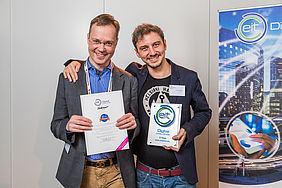 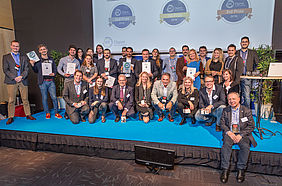 Aoife Solutions from Spain has been awarded as the best European technology scaleup in the category Digital Infrastructure for their technology that improves the performance of wireless networks. 3antS from Spain came second. The third prize went to the Finnish team of Streamr.

The Sevilla-based scaleup Aoifes has been awarded first place in the Digital Infrastructure category of the EIT Digital Challenge. The competition was held at the Internet Days Conference in Stockholm as one of five final events, each dedicated to a different topic (overview on all events).

Aoifes’ co-founder and CEO José González wowed the judges with a Cognitive Hotspot™ Technology (CHT) that enhances the spectral efficiency of WiFi systems - increasing performance, while reducing interference levels and power consumption. The company will receive access to EIT Digital’s pan-European innovation network, the chance to benefit from the business growth support provided by the EIT Digital Accelerator and additionally €50,000 in cash.

The second place also went to a Spanish team: 3antS from Madrid whose technology detects and eliminates illegal uses of online intellectual property by following pirated content and goods online as a crawler, automatically geo-locating them and forcing their withdrawal. The Finland-based Streamr took third prize with their cloud-based platform that enables companies to create micro-services for processing incoming data streams in real-time.

The three winning teams have been invited to an exclusive two-day event, held by the EIT Digital Accelerator in Berlin in December. Here, Aoifes, 3antS and Streamr will have the chance to meet the winners from the other categories, connect with EIT Digitals’ unrivalled ecosystem of industrial and research partners during a networking evening and discuss their growth strategies with international EIT Digital experts during workshops.

In total, ten digital technology companies from all across Europe competed in front of an international expert jury, whose members were deeply impressed by the quality of the competing teams. “In three years of the EIT Digital Challenge, this year's decision was the most difficult one. All of finalists are very promising companies. Therefore we decided spontaneously to assign our business developers to the teams and to see how we can further support them," announced Wolfgang Kniejski, Jury member and Access-to-Market Leader of the Business Community Digital Infrastructure at EIT Digital, during his speech at the award ceremony.