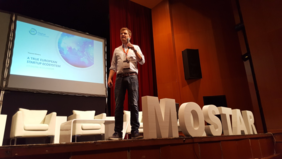 EIT Digital sees growth potential for regional startups in Europe by interconnecting with its wider European network. Last month, EIT Digital organised a Meet&Match tour together with the ARISE innovation partner ABC Accelerator based in Ljubliana, Slovenia, in order to meet the regional actors in the technological and startup scene by setting up events and pitching sessions in three countries around the Balkans. The tour included stops in Osijek (Croatia), Belgrade (Serbia), Sarajevo and Mostar (Bosnia and Herzegovina) in the second week of September.

RIS countries from the Balkans have great potential for development in the coming years. While EIT Digital ARISE has already invested in these countries, collaborations and interconnections can grow even more in the various regions, given the busy ecosystem landscape and the need for further knowledge integration in each market.

This collaborative approach was reinforced by the invitation from M. Nenad Popovic, the Minister for Innovation and Technology from the Government of the Republic of Serbia. The Serbian Government wishes to support the development of the startup and innovation ecosystem in the country and the Minister stressed out the role of EIT Digital in fostering growth in the region: “EIT Digital can help make Serbia a hub for technological development, not only with new startup companies but also with companies in existing, traditional industries.”

Representing EIT Digital at all Meet&match events in the region, Thomas Kösters, international outreach lead at the EIT Digital ARISE program, explained in his interview on Bosnian national TV network N2 : “EIT Digital sees great potential in the region and has seen many interesting startups, which we potentially could work with. Take the example of Koola, a Sarajevo-based founder team, which started in the local accelerator called “Networks”. They moved on to the ABC accelerator in Ljubljana and now are a potential scaleup with international growth prospects”.

ABC Accelerator will organise a Final Meet&Match Event in Ljubljana, in December, following the first round of events,. It will bring together the best startups from the Balkans with international corporations to start their collaboration with the first commercial pilots. EIT Digital and ABC Accelerator will also help organise the Sarajevo Unlimited conference that will be held on 2-4 November.

EIT Digital will closely follow the developments in the Balkan startup ecosystem. As an output of the Balkan Meet & Match tour, EIT Digital will publish a Balkan Startup Report with ABC Accelerator to come out in December at conference in Ljubljana.