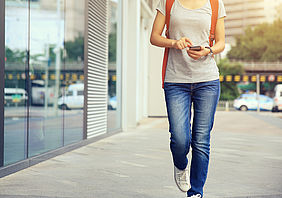 The city of Eindhoven is using GameBus, a social health gaming app developed at EIT Digital, to promote the subject of healthy urban living during Dutch Design Week (DDW).

Eindhoven puts health and wellbeing of its inhabitants at the heart of its spatial-economic plans, says Frans Dijstelbloem, cultivator-advisor Smart and Healthy Urban Planning in Eindhoven. "Spatial planning is becoming more important because more people are living in cities. To grow up healthy, to stay healthy and grow old with vitality in a powerfull economic climate, we will need to add sustainable values to both living and working conditions. That is why we're delighted to be working with GameBus during Dutch Design Week."

On the Dutch Design Week- theme: 'the making of healthy urban living', visitors can follow routes on the GameBus-app to localities where they can experience healthy urban living. Using the app, visitors can take photos at these sites and collect points for each picture taken. The visitors who gather the most points have a chance of winning prizes. In this way each visitor automatically also makes a photo album of their visit to the international event. Dijstelbloem adds: "Its a kind of gamification for building a future region devoted to healthy urban living".

GameBus project manager Pieter van Gorp is very enthusiastic about this deal. "A lot of people attend the event, I expect therefore an enormous jump in the number of users of GameBus. It is very exciting. This is the first big event where the app will be used in a non-controlled B2B-setting. We will also experiment with a new version that connects with the app Moves to keep track of the GPS-locations of the users. They can then automatically earn points in a healthy city-game."

The app was also used recently at a sports event where various Dutch universities gathered for a combined training session. The participants collected points for being physically, socially and mentally active. "More than half of the participants of the event used GameBus and almost 15 percent actively took Social Selfies", says Van Gorp.

The GameBus app integrates users' other existing health-related apps so they can play games with or against each other, compete with each other in physical activities and monitor each other's mental wellbeing. It is the product of an EIT Digital innovation activity in Digital Wellbeing that involves European partners including the Technische Universiteit Eindhoven, Telecom Italia, FBK, CNR and Trento Rise. EIT Digital's GameBus is available on all platforms (pc, mac, smartphone en tablets, as well for iOS and Android).

DDW is the largest design event in northern Europe. About 2500 designers will present their portfolios to more than 275,000 international visitors at more than eighty locations across Eindhoven. The DDW starts on 22 October and lasts nine days. Eindhoven is one of the sponsors of DDW.