Cyborgs just got a bit nearer ... 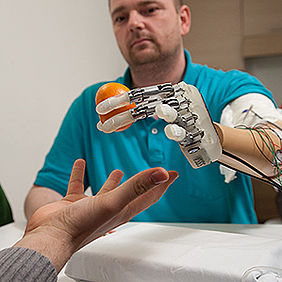 A man with a robotic hand can now feel varying degrees of pressure thanks to an implant that connects with the nerves in his arm.

A cyborg is a mixture of an organism and an artificial component strongly integrated. You are not a cyborg because you are wearing glasses, not even Google glass, but you might be considered a cyborg if you are wearing a chip in your eyes. These add on are, so far, aiming at restoring, at least partially, a functionality that has been lost, like a missing limb or loss of sight, but in the future cyborgs may be humans having augmented capacity thanks to the adds on.

One of the problem in creating a strongly integrated artificial add on is the interplay of the organism with the artificial part.

As an example we have been able to create artificial limbs that can restore walking or can a person to use a prosthetic arm to make up for the missing hand. What we have been missing so far is the perception at the cerebral level of the prosthetic hand. People having an artificial hand implanted have to look at it to pick up a glass. They no longer have the spatial representation in their brain even though recent technological advances have enable some control of the artificial hand by connecting some arm muscle to actuator in the artificial hand.  What you would miss, in addition, is the feeling of the surface your artificial hand is touching and of the pressure. Tis makes very difficult to pick up an egg: either you are too light in your holding and the egg falls, or you are placing too much pressure and the egg shell breaks.

I posted through the last five years a few technological advances on smart materials that can lead to the creation of sensory signal to tell a robot the kind of pressure it is placing on an object. Now researchers at the Swiss Federal Institute of Technology in Lausanne, Switzerland, in co-operation with researchers from several other European universities, including one of our EIT ICT LABS Partner, SSUP, have managed to find a way to connect these sensing enabled material to the ulnar and median nerves of an amputee proving that the pressure sensation can be restored. The implant was made on a Dutch that was able, for the first time since losing his hand, to feel an object like he was touching it with his thumb, index and pinkie.

The result has been published on the Science Translational Medicine Journal. The surgery was performed in January 2013 but only now it has been reported.

This represents a significant step forward in the integration of prosthetics with an organisms and at this point I guess we are really close to the creation of cyborg, or perhaps we are already there.

At the EIT ICT LABS we are not involved in this sort of innovations, although we are looking at CyberPhysical Systems and in this area advances in smart materials providing sensing capability that can allow a robot to perform better are clearly important.  In the past we have seen improvements in mechanical (computerised) systems being translated into human applications (prostheses). We are going to see this happening again in the future but I am pretty sure that we will also see advances in bionics having a fall back on mechatronics. Hence the need to look around a little further than our own turf.