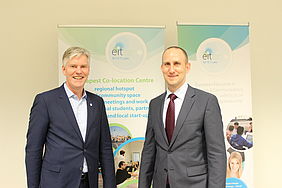 CryptTalk is a Hungarian-Swedish startup providing encryption solution that was awarded on the Central European Startup Awards in 2014. In the same year, links have been created with EIT ICT Labs’ Privacy, Security & Trust Action Line and the company has been coached and supported by the Business Development Accelerator of EIT ICT Labs.

At the beginning of May, the CEO of EIT ICT Labs, Willem Jonker came to Budapest to participate in one of Europe’s most important forum on innovation organised by the European Institute of Innovation and Technology (EIT) called InnovEIT 2015. During his pre-event visit at the Budapest APG, he met Szabolcs Kun, founder of CryptTalk and discussed briefly both the results of the months-long cooperation and the potential future plans.

As a result of the meeting, CryptTalk provides 200 licenses for EIT ICT Labs. Thus, EIT ICT Labs’s colleagues can take encrypted calls within the organisation freely for two years.