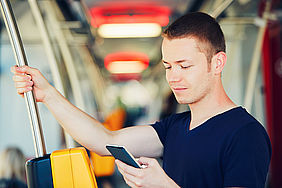 CopSonic is a technology that allows communication and interaction between two devices through sound waves. The secure transfer is achieved through microphones and speakers (E.g. use your smartphone to pay your bus ticket).

Paris, November 28, 2017 - The French scaleup in strong growth, CopSonic, which joined EIT Digital in the summer of 2017 to accelerate its growth plans and access new markets and European funding, confirms its development with important commitments validated with Orange Labs.

Emmanuel Ruiz, CEO and Founder of CopSonic explains: "We are very pleased with the trust placed in us by Orange. This is a very important agreement for us because it gives us a solid credibility in the framework of our European expansion for which the accelerator of EIT Digital accompanies us".

Founded in 1989, CopSonic enables highly-secured communication and interaction between devices through a unique system of ultrasound waves. CopSonic technology is hardware agnostic: data transfers for transactions like contactless secured payments, controlling smart home devices or contactless computer logins in a highly secured way are achieved through a device’s existing microphones and speakers. No specific additional hardware is required (unlike Bluetooth LE, NFC, or Lifi). The authentication and control of the system occur on CopSonic’s online and offline platforms.

Specialized over 20 years in digital audio solutions and new technologies, they are one of the first companies to have developed mixing mp3 players and audio effects in 1996 (Virtual Dj+ from GMixon).

Its Audio R&D Laboratory has been studying over the past years the communication and encryption of digital data and has discovered the possibility of modulating digital data into sound (acoustic waves). In 2013, the company filed patent applications around this innovation and started the introduction of the technology on the international market as a contactless universal mobile payment solution. The CopSonic technology was made public in 2013 and dedicated its activities to the development and marketing of the different ultrasonic connectivity solutions. In the following months, the technology rapidly evolved proposing new use cases in 3 activity sectors: Security, IoT and Proximity.