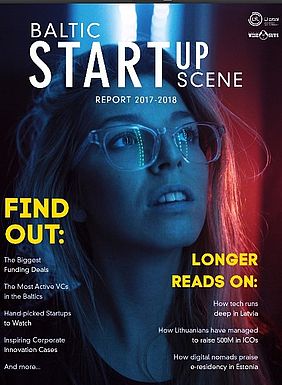 Estonia-based EIT Digital partner accelerator Startup Wise Guys teams up with EIT Digital to release the Baltic Startup Scene Report 2017/2018 with the aim of providing a snapshot into the regional ecosystem's latest trends and developments.

The Baltic startup scene is booming, indeed. With only six million inhabitants, the Baltics host 1,499 startups and per capita startup investment can easily compete with Nordic countries.

While each Baltic country - Estonia, Latvia, Lithuania - has conducted its own startup report, they are rarely analysed as a whole or benchmarked against surrounding regions. Therefore the Baltic Startup Scene Report 2017/2018 has been created by Startup Wise Guys and EIT Digital, providing both a comprehensive overview and benchmark with the Nordics and other neighbouring countries to get a better insight into the state of the region, its progress, its potential and, ultimately, its status in the world of startups.

The report provides insights into the growth of funding over the past five years, the biggest deals, the most active VC funds, the hand-picked startups to watch, examples of corporate innovation and more.

Check out some of the highlights:

The full report is available for download via: www.startupwiseguys.com/report

With 100 investments in early stage startups, Startup Wise Guys is one of the top investors in the broader CEE region and Nordics. To help techy startup founders become true entrepreneurs, they are running a world class boutique startup accelerator since 2012. They have accelerated more than 100 startups in 11 cohorts, focusing on B2B SaaS and Fintech early stage startups. Portfolio has already had 1 major exit and overall startup survival and success rate is above 77%. More information: www.startupwiseguys.com