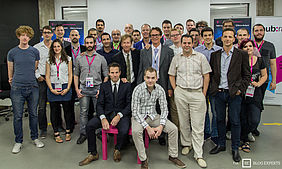 All participant teams of Telekom Innovation Contest on the day of the Champions Pitch. On the far left Adam Woolway and Jacob van Zonneveld from PlugSurfing (a BDA coached startup).

At the second annual Telekom Innovation Contest organized by our core partner Deutsche Telekom AG, Atooma from Italy triumphed in the Champions Pitch round. In the global final in Krakow a total of eleven startups from Europe and Israel competed for seed capital, hardware and software prizes, contacts to top decision-makers in the Telekom Group and inclusion in international startup events such as the Long Night of the Startups in Berlin, attracting up to 6,000 visitors.

Atooma - a Touch of Magic

Atooma is a platform that connects smart devices, apps and sensors to bring automatic smart actions to end-users. It is a Smart Action Automation App and Platform designed to integrate with various existing products and +80 services such as wearable devices, smart appliances, web and mobile services, and other hardware. The Atooma Platform enables Device Manufacturers and Brands to access their proprietary software development kit and application programming interface and activate desired smart actions easily through one simple interface.

Also VoiceItt, an Israeli startup, will be supported by Telekom. VoiceItt develops a voice technology application that allows people with severe motor, speech, and language disorders to use their own voice to express themselves. It provides a natural, easy to use Augmentative and Alternative Communication platform to people with speech and motor disabilities worldwide, improving their ability to communicate and allowing them to increase their independence and social interactions.

The Telekom Innovation Contest was created in 2013 by T-Labs in Berlin, T-Mobile Poland and Magyar Telekom in Hungary. In 2014, the ideas competition is also supported by all of Deutsche Telekom's incubators - hub:raum in Berlin, Krakow and Tel Aviv, along with Kitchen Budapest and UQBATE, a program for Telekom employees.

A total of 326 teams spread across 39 countries and four continents applied to enter the Telekom Innovation Contest this year. In national semi-finals the project partners selected eleven finalists. At the Champions Pitch in Krakow, the teams presented their ideas to a jury of international experts.

Image material of the winners and more information about the successful startups will be available soon at the following link: www.telekom-innovation-contest.com