An army of robots to sort out packages 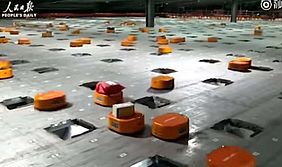 Last year, 2016, Hikrobotics, a subsidiary of Hikvision, made the headlines by showing (in action) a robot that can park cars. A car rolls over the robotic platform, the driver gets out of the car and the robotic platform takes over, parking the car among other cars with a precision of 5mm. In this way it is possible to park cars minimising the space. Several robots can be at work at the same time coordinated by a central system.

Now much smaller robots are at work at STO Express, a Chinese company in Hangzhou, managing 200,000 packages a day at half the cost of a human worker and with no glitches (take a look at the video).

The robots (quite similar to the ones used by Amazon in its warehouses) are loaded with a single package or a parcel and move under a bar code reader that wirelessly instruct the robot of the destination of that package. The robot moves along a grid till it gets to the delivery point where it downloads the package. The robots are controlled in their movements by a central system that make sure there is no collision, not an easy feat given the huge numbers of robots active on the grid.

Clearly sorting of packages is a job that lends itself quite well to automation, many sorting activities around the world are already automated. In many sectors it is not a matter of using automation to reduce the workforce but as the only way to sustain the volumes involved. Nevertheless, a decrease in workforce is happening and it is not balanced by the increase in workforce needed to manage and maintain the robots (that by the way autonomously look for the recharging station when power runs low).

These robots have been designed to operate within a warehouse but I expect, and several trials are under way, to see them (a modified version) to move out of the warehouse and reach (in different forms) the customer home. There are many hurdles to overcome, first of all moving in a not controllable environment, but I can see an evolution where robotic vehicles (autonomous vans) will be loaded automatically at the warehouse by robots, will drive to the vicinity of the delivery point and other robots will take care of the last leg (may be in form of drones). We should expect quite a change in the whole delivery chain in the next decade.