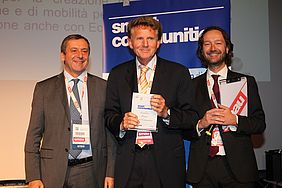 The platform 3cixty was awarded as a finalist at the Smart Communities Award ceremony that was held in Milan on October 23rd at SMAU, the most important Italian event dedicated to Information and Communication Technologies. The award was presented by former Minister of Education Francesco Profumo, who is President of the National Observatory on Smart Cities (ANCI).

As the finalists, 42 projects were selected that offer innovative and practical solutions that enhance smart communities and contribute to regional development. From the economic point of view, municipalities (and institutions collaborating with them) are seen as active players in providing both traditional and innovative services to citizens and to small and medium-sized enterprises in terms of smart cities and smart communities.

EIT ICT Labs and Fondazione Politecnico di Milano were selected among the finalists since 3cixty offers a unique and integrated suite of services. The 3cixty platform supports the development of (mobile or web-based) applications that exploit a comprehensive urban knowledge base in innovative ways, offering a "360-degree view" of a city. Apps and services developed on the 3cixty platform aim to provide visitors to the Universal Expo Milano 2015, as well as everybody else living in or visiting Milan, with a "smart city experience".

3cixty has been also recognised by SMAU as one of the success stories of the year 2014 in the area of tourism.

“This early recognition of the potential of the 3cixty platform will further encourage the members of our multinational team as we make the platform and its showcase application ExplorMI 360 available to an increasing range of stakeholders before and during Expo 2015” says Anthony Jameson, leader of 3cixty.

Because of its particular focus on Universal Expo Milano 2015, the 3cixty platform was also presented at the Arena EXPO 2015 in the workshop "Beyond Maps: 3cixty, a New Platform for City Exploration". The project team showcased and explained how the 3cixty initiative stands out because of its capability to integrate city data seamlessly into everyday life. Numerous SMAU visitors who were interested in testing the 3cixty platform and showcase app and better understanding its exploitation possibilities were welcomed at the EIT ICT Labs stand at SMAU, where 3cixty demonstrations were given for 3 days.