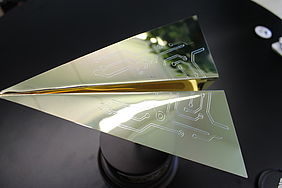 The first wave of the EIT ICT Labs Idea Challenge is over. But for the twelve contest winners it’s just the beginning. With enough cash, office space, and coaching support from the EIT ICT Labs Business Accelerator, twelve European startups have gained an injection to boost their businesses.

“It’s been a great competition with a lot of great competitors and pitches. For us it’s really important to have this international prize,” said Bernd Pohl, Co-founder of Testfabrik.“ We are going to do the best out of the money: hire people, optimize our product and go the next steps to build up our company.”

“We cannot wait to go back home and work even harder,” said Emilia Vila, CEO of Agroptima. “It’s an injection of motivation. We’re so happy that they [the judges] believed in us, because we want to really be the future of agriculture and now we are one step closer to make our vision a reality.”

The pitch finals took place in Rennes, Eindhoven, Helsinki and Munich and they all differentiated in their settings – while the Health & Wellbeing pitches for instance took place behind closed doors; the other three finals were presented in front of big audiences.  However, the mood amongst the startups was everywhere the same: excitement, euphoria, tension and hope were in the air. Despite the highly competitive situation, the innovators used the time before and after the pitches to exchange tips and encourage each other.

Positive vibes also resonated after the award ceremonies. Not only because as Jean Gelissen, Health & Wellbeing Action Line Lead and Idea Challenge judge stated: “EIT ICT Labs network is open for all the finalists”; but also because the participation alone was a great opportunity to gain international visibility for all finalists. EIT ICT Labs Idea Challenge’s international media partner Silicon Allee covered the Idea Challenge since the kick off in March 2014, and introduced all finalists in their articles. Also other media such as Arctic Startup and Rude Baguette as well as politicians like Neelie Kroes (Vice President EU Commission), have helped the Idea Challenge, thus the participants, to generate attention through writing about it on news and social media sites.

Over 600 startups registered on the Idea Challenge website. Finally, 311 applications were submitted from 25 EU countries. 36 teams were invited to pitch their ideas in 4 different European cities. The age of the finalists varied between 20 and 65. 28 judges evaluated the pitches. The Idea Challenge team travelled 8,584 km in total to meet all finalists and spent almost 6 hours to see all pitches.

Thank you to all supporters

We would like to say thank you to all our supporters throughout Europe – to the EIT ICT Labs partners, politicians, editors, professors, investors, incubators and anyone else who shares our vision to foster innovators as they are in the best position to boost tomorrow’s economic growth, and to create tomorrow’s jobs. Thank you for spreading the word – and don’t forget: After the first wave of the idea Challenge is before the second wave. Next submission phase starts on September 1, 2014.