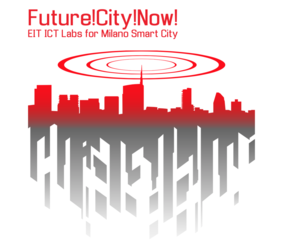 The Digital Exhibition Future!City!Now! opens under the big umbrella of EIT ICT Labs, part of the European Institute of Innovation and Technology. It presents innovative ways of getting to know a city, going beyond traditional users of interactive maps, with three initiatives focusing on Expo 2015 and oriented towards Milan as a Smart City of the Future.

3cixty is a data and software platform that facilitates the development of mobile and web-based applications for those who visit or live in a city like Milan. City Data Fusion for Event Management displays the dynamic pulse of the city during major events using social data streams (Twitter and Instagram) and call data record. StreetSmart supports customized interactive applications for large screens that integrate interaction at a distance, based on gestures and movements, with interaction via personal mobile devices.

TIM4EXPO location is hosted in Triennale basement, just overlooking Triennale Garden. The location is a show room for technologies, smart devices and the Digital Smart City Expo 2015; a multifunctional single 120 sqm room, which can be adapted according to the needs, for private or public events. TIM4Expo is a partnership between Telecom Italia and Expo 2015 Spa, with the aim of highlight Telecom Italia role as a “Integrated Connectivity and Service Partner” for the event Expo 2015.

Triennale di Milano is a design museum and events venue, located in Milan in the park grounds adjacent to the Sforza Castle. The impressive Triennale was founded in the early 1930’s, inheriting the ambitious character of the Great Exhibition and, in over seventy years, has become a prominent location for contemporary design and culture. A well-constructed and multiform space dedicated to art and research together with artisan skills and industrial production; a venue where exhibitions, conventions, debates and architectural design, figurative art, communication and fashion events take place all year round. It hosts exhibitions and events, which highlight contemporary Italian design, urban planning, architecture, music, and media arts, emphasizing the relationship between art and industry.

Triennale di Milano is a dynamic creative space in continuous transformation; a permanent channel of communication and dialogue for the development of both planned and creative thought. The museum houses the “Collezione Permanente”, a collection of significant objects in contemporary Italian design.

Explore the city of Milan with a 360° perspective!

That is the aim of one of the applications leveraging on the "3cixty" platform capabilities. The application and the platform have been developed by EIT ICT Labs (European Institute of Innovation and Technology). They will be presented in Milan at Move App Expo on October 11–15. 3cixty is being developed through collaboration of various partners from Germany, Italy, France, and the UK, among others Telecom Italia, Thales, Centro Ricerche FIAT, DFKI, Inria, Eurecom, Politecnico di Milano, CEFRIEL, Fondazione Politecnico di Milano.

3cixty is an initiative that stands out because of its capability to integrate city data seamlessly in everyday life. It offers a platform and an ecosystem of services that provide comprehensive and diverse information on the urban environment and on urban mobility. For example, an app developed on the platform will give city visitors a possibility to explore in novel ways a variety of events and points of interest in Milan to create their own "wish list", which will help them to reach new locations and previously visited places with a mobile guide. Apps and services are being developed by a professional project team, along with the contribution of students through an App Challenge organized by Politecnico di Milano on the 3cixty platform. The aim is to provide visitors of Expo 2015, as well as everybody else living in or visiting Milan, with a "smart city experience". After being applied to Milan during Expo 2015, 3cixty platform will be later applied to support urban needs in the city of London.

City Data Fusion for Event Managemen offers, to managers of City Scale Events and to their visitors, services for visualizing how the event is perceived by fusing and making sense of a variety of volatile and massive data available in digitized cities. In the scope of the project, Politecnico di Milano and Telecom Italia performed several case studies in numerous Italian cities for different customers: Milano Design Week for fuorisalone.it, Festival della Comunicazione of Camogli and Festival delle Letterature of Pescara for LiveOn4G di TIM, Inter-Napoli football match on 19th October 2014 for TIM stadium and the analysis of the summer holiday season of Como for the Municipality. The project also intends to cover Milano Expo 2015, for this reason it has been recording for more than a year social and mobile telecom data stream about Milano. The project demonstrated how it is possible for city scale event managers to analyse in real-time and post-hoc the events they organize and for visitors to visualize the digital footprints they left.

StreetSmart Politecnico di Milano (Department of Electronics, Information and Bioengineering) and Telecom Italia (Joint Open Lab S-Cube) have developed some innovative technologies in the context of the EC project EIT-ICT Labs 2014 “StreetSmart”, which integrates large public displays with personal mobile devices and exploits a combination of touch interaction and touchless interaction at the distance, based on body movement and gestures. These applications offer new opportunities to communicate and engage with multimedia contents and digital services in domains such as tourism and fashion.