Lunch Presentation on Patenting in Europe (in Berlin) 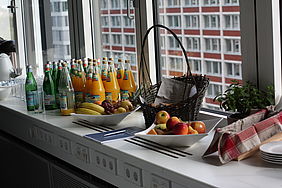 The Patent Booster catalyst invites you to a lunch presentation on Wednesday 13 February at 12.00-14.00 at the the Co-Location Centre in Berlin. Seats are limited, and lunch sandwiches will be served.

It is well known that ICT companies are very active in the patent market. Patents have moved into the spotlight during the past couple of years - mainly due to high-stakes litigation and acquisitions involving international giants such as Apple, Samsung, Google and Microsoft. However, European companies have a lot to learn when it comes to patent monetization. The United States is the only country where patents are being sold in the billions of dollars, and where courts issue damages awards in the hundreds of millions. Europe does not deal in such numbers at present, but it does own a significant number of patents in the United States with a hidden value to the patent market.

During this presentation we will uncover the latest development in recent patent transactions in the ICT sector. We will also compare the European and US markets to reveal what Europeans should do to avoid missing out on potential revenue streams, and become a competitive market player.

Anders Arvidsson is Director for Value Extraction Services at Zacco, which provides a world class intellectual property services to help you assess, define, protect and exploit business opportunities through intellectual property rights. Anders joined Zacco in 2011. He has 19 years of experience in developing, valuating, and monetizing patent assets. Anders is recognized as a global leader in helping patent owners maximize the value of their IP. As a market-maker, Anders is one of the pioneers to create an emerging market place for patent transactions in Europe. Prior to Zacco, Anders worked at Nokia for over 13 years as head of Nokia´s Patent Acquisition team.

The number of seats is limited. Please announce your interest to Patrik Lundmark.