Your heart is ticking... 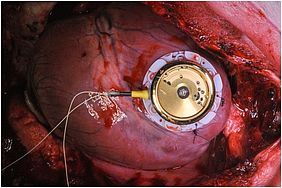 The energy harvesting device is sutured directly onto the myocardium. Credit: European Society of Cardiology

I guess this innovation could only have come from Switzerland, at least that was my first reaction reading it.

Researchers at the University of Bern, Switzerland, have managed to create a pacemaker powered by the movement of the beating heart. To do that they picked up the mechanisms of an automatic watch and used its movement to generate the electrical power needed to power the pacemaker.

As observed by Adrian Zurbuchen, a PhD candidate that has worked on it, the heart is providing a continuous movement and the mechanisms that powers watches by exploiting the arm movements, invented in 1777, is extremely reliable.

The idea came to professor Rolf Vogel, a cardiologist and engineer at Bern University, that was trying to solve the problem of limited life span of the battery powering the pacemaker as well as the (rare) occurrence of broken wires that represent a life threat to the patient.

The new pacemaker, that has been tested on pigs (whose heart, sorry about that, is similar to ours in many respects), consist of a energy harvester, taken directly from a commercial automatic watch, that compresses a spring, as it does in a watch. Once the spring is fully loaded that mechanical energy is used to spin a wheel that in turns connects to a micro energy electrical generator. The current is used to recharge the pacemaker accumulator (battery) providing continuous power as long as the heart beats.

What I find really fascinating is this mixing of an old technology with a new one to create this innovation. It also shows the ingenuity of researcher in scavenging energy, an area that, I bet, will see a strong evolution in the coming years, as the Internet of Things will conquer the world.