Your brain is bright! 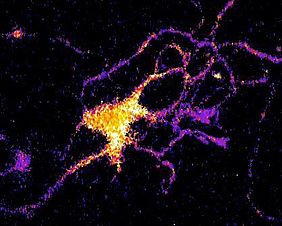 One would tend to interpret those words as a figure of speech. Yet, it seems that in the future one can literally mean that.

Optogenetics has been around for a few years now providing researchers with a new tool to affect the behaviour of neurones using light. Now a team at Vanderbilt University has found a way to have neurones emitting light when they perform certain activities. This is possible by a set of steps, each of them a kind of science fiction.
First they extracted from a shrimp that is luminescent the gene that is responsible for producing the enzyme luciferase and modified it a bit. This is the same enzyme that allows fireflies and other species to blink. Then they inserted the modified gene into a virus that is capable of infecting neurones (without damaging them) modifying their genes by adding the luciferase one.  When the neurone activates the cluster of genes containing the implanted one it start to emit light, as a firefly.  The activation of that gene cluster is associated to a specific activity of the neurone. Hence with this method it becomes possible to monitor hundreds of neurones that are engaged in a specific activity: they all blink!

The research is still in its infancy. So far the team has been able to show the method work on slices of a mouse brain hippocampus. It will take several years, if not decades, to make this approach usable in a living brain but these are progresses showing how research is moving in the exploration of what is likely the most complex system on Earth.