You are the Future! Disruptions happen... 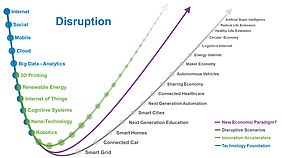 Disruptive scenarios proposed by Thornton May, futurist. Notice how he separated technological enablers, like big data analytics, from innovation accelerators, like 3D printing from disruptive scenarios. In between there is the question mark of the economic evolution and its feedback on technology and scenario evolution. Credit: Frank Diana's blog

Big bangs are rare, but their occurrence is proof that surprise is always around the corner. As physicists in the XIX century felt that the basic building blocks of physics were all in places and just a minor refinement was needed to capture all physical reality, the Einstein field equation came up to change our idea of the space time we took for granted and soon after the  Shrödinger  equation shattered the Newtonian vision of a deterministic world.There are not just instant when a disruption occurs. Most of the time disruption happens over many decades. That was the case of the industrial revolution, of the electrification of factories, of the emergence of electronics.

On April  19, 1965, Moore's paper, Cramming more components onto integrated circuits, was the harbinger of a revolution, still unfolding, that no-one saw coming, not even Moore.

The continuous, persistent shrinking of the transistor, the decrease of chips cost au pair with their increased performance, shifted the industrial society into the Information Society.

The transistor made cellphone possible (you can have a computer based on vacuum tubes, filling up a hall, but you cannot carry a few tons on your hand….) as many other things we take for granted, like digital music and car navigation system. Actually, our everyday life is moving on a carpet made by transistors…

However, the manufacturing of the transistors (that is the real innovation, although we don’t perceive it) in ever better cycles of improved efficiencies, changed the economic landscape, and our perception of the world.

It is because of the continuous relentless evolution that we have come to take … evolution for granted. Give it a year time (less actually) and you will see a better and cheaper television, cell phone, car, ….

New applications will continue to pop up, and it all seems just natural.  The idea of treasuring an object to hand it over to our grandchildren, so common in the past, is now nowhere to be seen.

If something breaks, wears, or just gets old, throw it away and get a new one. Repair is no longer a common verb.

Now the relentless ride of transistors improvement is reaching and end (it did in 2014 in terms of economics) and we may be seeing some changes to our expectation. At the same time the level of performances in processing, storage and communications are creating a platform for continuous innovation in other areas, from data (big data) to genomics, from nanotech to smart materials and there is no end in sight. So we can keep fuel our innovation expectation for the two coming decades at least, although with different  flavour.

ICT is no longer “evolving” as it did for the last 50 years but it is going to sustain the evolution in several other fields for decades to come. And this brings in plenty of opportunities for those who will be living in the future, creating it, the  millennials.

I also like the highlighting of new economics paradigms as a link between technology (foundation) evolution and innovation accelerators but I would also include cultural changes (that are related to technology and market adoption).