Yes, coffee does make a difference... 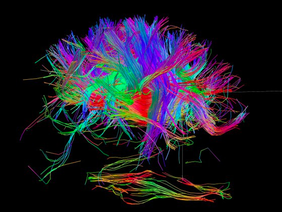 The Human Connectome project is progressing in mapping the connections among the hundred billions neurones in our brain. It is still quite a way to go. Different teams are looking at different parts, like mapping the neural networks starting from the retina and following them as they go through the optic chiasm and then on to the amygdala and to the occipital lobe.

Others claim that like with the genome, in spite of the differences there are strong similarities and we can learn and generalise from them.

Another question is that the connectome being investigated is the one of a person at a very specific time in his life (there are now technologies that allow the investigation of connections in a living brain, up to a certain extent), and if we were to look at that bran at a different time we would find different connections. Of course, we know this is true but the question is actually about the existence of some blueprint that can be found, with divergence from it identifying specific times in the life of a person or different persons.

This is what Russell Poldrack, a Stanford psychologist, has investigated over the last two years and he is now reporting its findings in a paper on Nature.

For a year and a half he has taken MRI scan of his brain twice a week and once a week he drew his blood to have data on metabolonics and genomics.

This has resulted in an impressive array of data that he is now opening to public study.

One of the outcome from this observation is that coffee (caffeine) actually changes the brain connections (see figure). He discovered that because on Tuesday, when he drew blood, he had to fast, so no breakfast and no coffee, and out of that he detected a clear pattern of a tightening of the connections between the somatosensory neural network and the higher vision network.  Just one day without coffee can make a different in our brain!

Not sure if Starbucks want to make a case out of that...

One of the (more) interesting results, however, is the proof that similarities are strong, and remain strong as time goes by. This is true for a brain but this makes the extrapolation to other brains reasonable, thus giving strengths to the researchers working on the human connectome.

Russell hope that his quest will be followed by many others so that results can be compared. Indeed, this is what happened with the human genome. As better, faster and cheaper sequencing tools became available more genomes were sequenced and similarities started to emerge providing the general blueprint needed to pinpoint what is ok and what can be a problem.

This is something that will happen, for the connectome, in the next decade, although we are likely to start seeing the first results in some brain circuitry in the next two years.