Would you trust a robot? 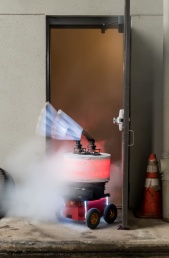 A long camera exposure shows how the arms of the “Rescue Robot” give directions to building occupants in case of fire or other emergency. Credit: Rob Felt, Georgia Tech

Robots have been part of people imagination for almost a hundred years, I guess every persons (or most of them) knows the word robot and has an idea of what it is often associating the word with an anthropomorphic shape (a robot-man).

In these last few years, however, robots have become a reality in several fields, most of the time hidden to our perception. The metro I take in Turin is a robot even though I seldom connect it to the idea of a robot.

At a post office in Seoul I met a robot that was there to provide information to people queuing and it (he?) was kind enough to tell me that I could get stamps directly from a machine at the entrance. Yes, it spoke English to me and Korean to another person in the queue.

We are going to see more robots in our everyday life. And this begs a question: can we trust them?

My first reaction is Yes, and it is based on the assumption that the robot has been instructed (programmed) to provide a service and that is what it does.

Researchers at Georgia Tech decided to make some experiments (watch the clip)to evaluate the level of trust that people have in robots. And the results show that people DO trust them, even in emergency situations, and even after they have demonstrated some counter-intuitive behaviour.

They go a number of students into a room and simulated a fire (by generating safe-to-breath smoke). The students were warned by the emergency situation by a robot that opened the door and invited the students to follow it (through an illuminated sign on its belly and using illuminated arms to show the way).

The experiments show that students eagerly followed the robot, also when it seemed to have lost its bearing by circling twice in a maze of corridors, and also when it pointed them to a direction that was opposite to the one indicated by an EXIT sign.

I found these results interesting...
It would be nice to see also a situation with a person indicating a direction and a robot indicating a different one. Who would people trust?

Is trust related to a specific situation (like a fire emergency) or can it be generalised?

Can you trust a robot to teach you a new job?

Can you trust a robot to point you to a new music (yes you do when using one of the many apps that suggest new songs to you)?

Can you trust a robot to pick up your date (there is software on line that does just that, and that is a robot too!)?

Can you trust a self driving car (a robot!) to take your kids to school or your baby to the nursery?

There will be many more "Can you..." popping up in the next decade.

Get ready for them...