Would you care for two extra thumbs? 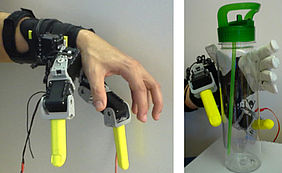 Ever happened to have something slipping from your hand? A better grip sometimes would be good to have.

On the other hand it never happened to me (what about you) to desire an extra thumb for a better grip. The fact is that we are so used with a 5 finger limb that it does not come to mind the idea of having more fingers. And actually when we look around we do not find animals with more than 5 fingers. How is that?

Scientists tell us that there used to be animals over 340 million years ago with 6 and 7 fingers but as evolution progressed these extra fingers vanished and accruing to evolutionary habits it is easier to see something disappear than something new popping up.

Additionally, in finger formation we have an example of pleiotropy, the situation in which several genes all together control several characteristics. In the case of finger growth we see that the same genes controlling the number of fingers in a limb are also controlling our reproductive system. Hence you better not screw up with that.

At MIT at the department of mechanical engineering researchers have developed a robot that you can wear on your wrist to give you two extra fingers, two thumbs actually. You can see it at work in the clip.

Interestingly the operation of the robot is seamless, you don't meet to think about its operation. You pick up an object with your hand and the robots can determine from sensing the movements in your wrist what is going on and it behaves accordingly.  I am not sure how good it actually is in "understanding" how it should help but the idea of having a prosthetics that can seamlessly integrate with us is at the same time amazing and scaring.

To tell the truth, we already have prosthetics that work seamlessly and adapt their behaviour with what is needed, like implanted drug dispensers or smart pacemakers that adapt the quantity of drugs released or the frequency of the pulses to the actual need of our body. But they are somewhat hidden from our perception.