Will the next LED be made from nanowires? 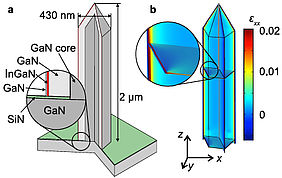 (a) Sketch of an LED nanowire showing the onion-like structure of the layers; (b) Finite element method simulation of strain distribution. Credit: Tomas Stankevic, Niels Bohr Institute, University of Copenhagen

At the beginning of this century, around 2002, researchers came up with a new display technology, NED - Nano Emissive Display, based on carbon nano tubes. Motorola actually demonstrated a display a few inches wide made of these nano tubes and Sony expressed the interest of using this technology forecasting its deployment in the mass market in 2007.

Nothing came out of that. In spite of the expected very high resolution (over 300 pixels in the space that was occupied by a single LED pixel), the potential lower manufacturing cost and the unlimited size of screens (that could be the result of the modular assembly of smaller displays) it never made to the market. The main reason was the spectacular market growth for LCD/LED and the parallel linear improvement in production technology that kept slashing prices.

Now researchers at the Niels Bohr Institute in Copenhagen have announced the discovery of a way to manufacture nanowires (not nano tubes) that can emit light in different wavelengths (colours) depending on the way they are manufactured. Each nanowire is roughly 2µm long and 10 to 500nm in width (compare this with the size of a LCD pixel: 11.25µm, 5 times as much).

Each nanowire consists of a core made of gallium nitride and an outer layer of indium gallium nitride. The mechanical strain existing between these two layers affects the emitted wavelength.

These nanowires can be used to create displays in smart phones and televisions offering brighter light with lower power consumption. It remains to be seen if this will remain a "lab-technology", as it happened for the NED or if it will find a way to the market.