What's boiling up in technology - the WEF vision - I. Internet of Nanothings

Take a look at the World Economic Forum vision on the 10 emerging technologies in 2016. Credit: WEF 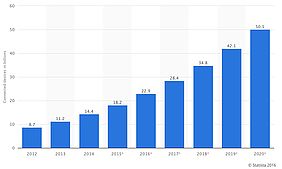 The growth in number of connected devices is estimated to reach 50 billions in 2020. Credit: Statista

The World Economic Forum has published its latest report on 2016 Emerging Technologies, providing a distilled  "vision" on technologies that are likely to have an economic impact this year.

Let's see their pick and my comments:

1. Nanosensors and the Internet of Nano-Things. The WEF observation is that the expectation of 30 billion connected devices by 2020 will be supplemented by other connected things mostly comprising nano-sensors circulating in our bodies and embedded in construction materials.

>>> There is quite a bit of confusion on what "Thing" means. Here the WEF makes reference to devices, hence I would guess to smartphones, computers, tablets, televisions, cars, robots, digital cameras.... My take is that we are already close to this number today if we include network elements, anti-theft systems, security cameras.... Then the WEF includes nano-sensors and rightly so expect this addition to have a significant impact in many economic areas, from health to agriculture. However, I tend to consider these nano-sensors as an emerging technology that is unlikely to have an economic impact before the end of this decade. In the meantime, I see a disaggregation, or opening, of devices to provide direct access to the embedded sensors, and to the data they are creating. We have seen major manufacturers, like Samsung and Apple, opening up, via API (Application Programming Interfaces) the access to sensors embedded in their products (like smartphones and watches). A smartphone has at least 10 different sensors, and top of the line may have 15 different ones. If you consider as connected "thing" each of these individual sensor you already are approaching today the 50 billion mark. And there are companies, like Sensordrome, that sell adds on packages to bring even more sensors to your smartphone.
This disaggregation is doing more than just multiplying by a factor of ten the number of connected Things. It provides the data that can feed data analytics algorithms (ever more sophisticated) to create "virtual sensors", further multiplying the number of "things" connected. Whether you consider this as part of the IoT family or not it is up to you. For me they are, and more than that, these disaggregated sensors and the derived virtual sensors are the ones that are going to change the economic scenario pushing the economy of bits into the economy of data.

A final comment. My feeling is that in the next decade we will see a shift from the concept of "embedded" sensors to the one of smart materials where sensing is just one of the property of the material itself. This will foster a further "revolution" both in economics and, most importantly, in our perception of the world that will become more and more responsive and "aware".