Wearable, in the end, may be good for your health! 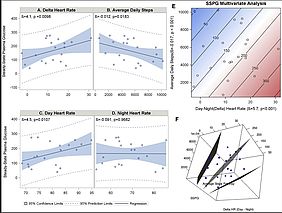 A variety of meaningful information can be derived from the analyses and correlation of data generated by wearable .... Credit: Stanford University of Medicine

I remember sitting at a TTM, Technology Time Machine, a few years ago listening to a speech on the usefulness of data generated by consumer products monitoring daily activity and some health parameter like heart beat, respiration and so forth.
The speakers said that the data generated by these “gadgets” (his word) were too inaccurate to be useful for health monitoring purposes. And he provided several reasons to support his statement, convincing ones, I should say.

Now, however, I read an open access article published on PLOS/biology by a tem of researcher at Stanford University of Medicine that have investigate the use of mass market wearable sensors to reveal health information.

Their conclusion is that by correlating data one can derive useful information that is even able to identify issues that are not perceived by the person, like asymptomatic inflammation.

The key point is correlation. Single data might not be that accurate but once you examine millions of them a significant pattern can emerge.

They collected some 2 billion measurement from 60 people that participated in the study,  resulting from up to 250,000 measurement per day per person, generated by a variety of wearable (up to seven per person).
Out of this mass of data they have been able to detect specific patterns that also correlated to the person environment. As an example they detected a lowering of oxygen saturation in the first hours of flight, with saturation tending to go back to normal after a few hours in longer flight (showing that the organism does not like flying but after a while adapt itself).

The patterns emerged from the analyses of a single person data stream and from the correlation of data streams from different person.

This leads to the conclusion that a continuous monitoring, even based on consumer market “gadgets” in a broad population may indeed be useful in a rigorous health protocol.

I find this quite interesting in its potential for improving health through preventive medicine and to help detecting issues in a community, like in a urban environment the first signs of health hazard situations.

It is an area where Big Data can indeed play a “Big Role”!