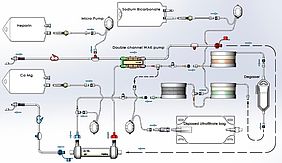 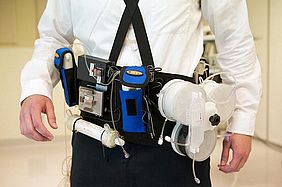 We are used to miniaturisation. Computers that 50 years ago required a large room can nowadays be squeezed to the point they fit inside your cell phone (and by the way, they are much more powerful than those filling a room, some 80,000 times more than the ENIAC!).

Miniaturising mechanical systems, however, is a different story. In the last decade, however, we have started to see the appearance of new technologies, from MEMS (Micro-ElectroMechanical Systems) to Nano-technology and fluidics, that have changed the perspectives in some areas.

Researcher at the University of Washington Medical Center in Seattle have created  a wearable artificial kidney, WAK, that can be used for blood purification. The WAK has been tested on 7 patients at the Cedars-Sinai medical centre in Los Angeles.

An artificial kidney is a bulky device, and even the ones that have been created in the last decade to be used at home, even though relatively smaller, requiring the patient to have the dialyses to lay down on a couch for the several hours it take for the procedure to complete.

The WAK is really wearable (although still bulky when considered as a wearable device) and allows the patient to move around, go the the office, do her (normal) life. You can take a look at it in the clip.

It works on batteries, rather than needing to be plugged into the mains. One of the crucial innovation that makes WAK possible is a filtering system that can support the entire procedure using just half a litre of pure water, versus the 12 litres required by current dialyses systems.

The WAK is still in a prototype stage and refinements are under way. The goal is to provide a much improved quality of life to the 2+ million people that need to have dialyses every week (more than once a week usually).