Voice is overwhelmed by data 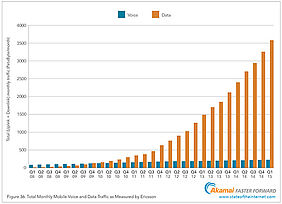 This is not due to a substantial decrease of voice traffic but to a tremendous increase in data traffic on mobile.

The situation is similar, actually even more significant, in the fixed line domains where we have three phenomena:

And this growth is just the beginning. The expectation, according to Cisco, is to reach 30EB per month by 2020 of mobile traffic with an average of 1.5 mobile device per person in 2020.

Smartphones will generate and take the lion's share of this traffic, four fifth of it in 2020.