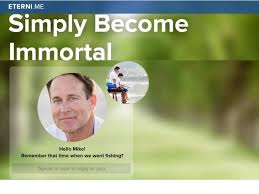 A screenshot proposed by Eterni.me, a start up supporting your virtual existence on the web once you pass away. Credit: Eterni.me

Several years ago, 2009, I was involved in a group of people tasked to chart the broad evolution of Internet and identify the commitments that Europe as a whole should take to foster and leverage on them. The work was done through scenarios building and you can find a few of them in the final report.
One of the scenarios that I developed, not published in the final report because it was felt to be a bit scaring, was about the possibility of keeping interacting with people once they passed away, based on the creation of their personality and experiences that would be used to impersonate an avatar with their "soul".

This came to my mind as I stumbled onto a start up, eterni.me, that is proposing to do just that.

You can subscribe (I just did...) to their web site and once they will be ready they will ask for permission to access you digital life records, tweets, posts, intagrams, Facebook... That will provide them with your "public" experience and they will be using it to create a virtual you that can remain in the cyberspace and keep on interacting with other people. They do not say whether this virtual you will remain the same or will grow on as interactions will take place. On the one hand, I guess, it will have to grow because it (or should I say "he"?) has to remember the past interactions to make the future ones meaningful; on the other hand, if that virtual you will grow based on the digital experiences it will slowly diverge from the digital you that was just recording the "real" you. But if it diverges than it will no longer be exactly you and as time goes by it might become quite different from the real you...

A complete new set of questions opens up. That was also one of the reasons at the end we decided not to include my scenario in the final report. And yet, what I imagined six years ago is now a concrete proposition.   Time flies!