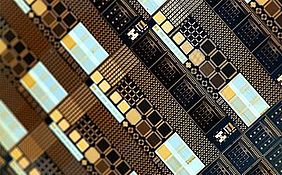 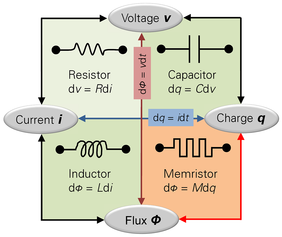 The drawing shows the relation between Voltage, Current, Charge and Flux and the related electronic components. Memristors was the last to be created, in 1996 and only recently industrial manufacturing has become possible. Credit: Stack Exchange - Electrical Engineering

One of the baffling issue in our attempts to understand the brain stems from the idea that our brain, any brain actually, is a computer. Based on that we calculate the throughput of the brain (which is highly debatable...) and then we compare it with the throughput of our computers. The assumption being that once we have a computer with a comparable processing capacity we should be able to get similar quality in information processing, aka intelligence out of a machine.

The baffling comes when one looks at Nature and discovers that a fly brain uses some 5,000 neurones as Management Flying System. This neuronal networks has a very low processing power, far lower than the processing power a modern airplane uses for doing basically the same thing. In a way it is like the statement made by the French entomologist in the 1930s that the bumble bee cannot fly according to the law of physics. That was solved in the last decade by noting that one should apply a different set of physical laws, not the one we use for our airplanes, and if you do that you have the explanation of the bumble bee flying prowess.

The answer to the unexpected capability of a fly to govern its flight with "just" 5,000 neurones need to be found in the way it does that, and that is not the way a computer does it.

Now a team of scientists at Southampton University has come up with a solution to process neurones activity in a much more efficient way using memristors. Memristors, see the video clip, are a relatively new type of electronic component that complete the set of resistors, inductors and capacitors (see the drawing). They have the interesting property of "remembering" the previous processing and this affects their response to new input. This is very similar to what neurones do.

Researchers at Southampton University have shown that a memristor can compress up to a factor of 200 the processing required to analyse neurones spikes with a power demand that is 100 times less than a usual computer chip; this makes possible to have a chip performing real time analyses of "what is going on" at brain level (although in a very limited area).

The goal is to have implantable chips that can help detecting brain anomalies and take corrective actions in real time. It is no longer science fiction, it is still not feasible but there is a clear path of technical hurdles that need to be solved, and if experience is telling us something is that these hurdles will be solved.