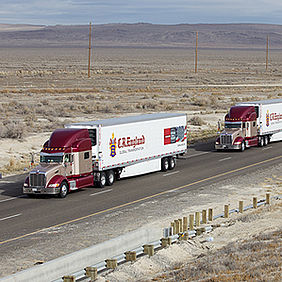 The two trucks traveling in a platoon formation controlled by on board computers. Credit: Peloton

At the EIT ICT Labs one of our partners, CRF, has been working for quite a while in the area of car to car communications as a way to improve safety on the road.  It is therefore an area that piques my interest.

I just read of a successful experimentation of a truck to truck communications performed on the Utah and Nevada highways involving two trucks that are tethered by computer to travel as a platoon.

A start up, Peloton Technology, has developed a system that allows two trucks to travel in a platoon formation, separated one another 30' (about 10 m). The advantage of this platooning is a lower fuel consumption, 4.5% less for the front truck and 10% less for the truck travelling behind. The lower fuel consumption is the result of a decreased drag.

In theory it won't be problem to create a "train" of trucks, further improving on fuel consumption but having a long convoy spells problems for cars looking to overtake the line...

If the driver in front brakes the computer on the truck in the back is notified instantaneously and will direct to brakes to slow the truck, still maintaing the same 30' distance. A video screen on the truck that follows rely the images captured by a camera on the front of the first truck so that the driver can see what is ahead.

The system provides a practical way to decrease fuel consumption that in the case of a company involved in long haul transport may result in a saving of 100,000$ per year per convoy. Quite some money!