Towards carbon based electronic circuits 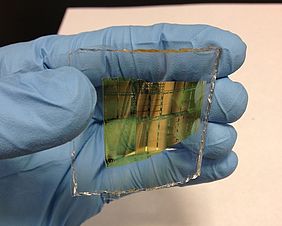 At the University  of Southern California a team of researchers is preparing for a future where electronic circuits will be based on carbon nanotubes.

They just published an article on Nature describing a process to create a hybrid circuit based on thin film technology and carbon nanotubes.

According to the researchers the hybrid circuit leverages the strong points of each technology and hides the respective weaknesses.

An interesting area is the one of embedding electronics into our body. If circuits are made of silicon they are stiff and may hurt the surrounding tissues as they move as result of body activity (even the flow of blood in tissues creates some displacement ...). For safe implantable circuits we need flexible material and thin film electronics embedding nanotube is meeting these requirements.

Additionally, the process required for thin film transistors is not as complicated as the one used today for etching silicon, it can be based on printing technology. According to the researchers in the next decade we should be able to print this type of circuits as easily as we print a newspaper today...