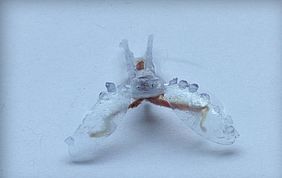 We have seen in the past two decades the rise of technologies that can interact with bio tissues and individual cells. We have see some exploitation of living cells as sensors and preprocessors for enhanced computation. But a real functional integration has not been achieved, mostly because the survival of cells/tissue in an artificial environment is problematic and so far has not lasted for more than a few hours.

Now we are starting to see the first signs that a bio-hybrid machine might be possible.

As an example, at Case Western Reserve University researchers have created a hybrid bot by mixing 3D printed material with muscle tissue taken from the mouth of a sea slug, Aplysia californica, that can be stimulated with electrical impulse to induce locomotion. The hybrid bot has kept its properties for 6 days, that is a much longer life than anything similar attempted so far.

An even more striking hybrid bot is the one developed at Harvard, in conjunction with several other universities, where researchers have created a miniature manta-ray by printing living cardiac cells on an elastomer in precise patterns. The cardiac cells, taken from a rat heart, have been conditioned to respond to specific light colours (wavelengths). Hence, using different light colours it is possible to activate specific cells and guide the movement of the hybrid robot (watch the clip).

We are still very very far from a "cyborg" but, as they say, every long journey begins with a small step, and this might be the one.

It is another example of what new technology can do in leveraging from Nature evolution to accelerate "our" time evolution.