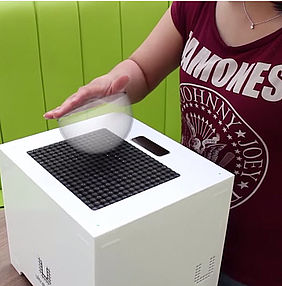 Ultrasound is focused to create the shape of a virtual sphere. Credit: Bristol Interaction and Graphics group, University of Bristol, copyright © 2014

Haptic interfaces have been evolving rapidly becoming more and more accurate. Their applications vary, from video gaming (I got an haptic force feedback joystick several years ago to play flight simulator....) to professional areas, like surgery training with an haptic scalpel simulating the forces one would encounters when cutting a specific tissue.

However, so far, haptic required to touch a solid surface connected to a motor providing the force feedback or a vibrating surface (like a layer on a screen) to convey tactile sensations.

Now researchers at the Bristol University Computer Science Dept have published a paper illustrating a new way to create a haptic sensation based on ultrasounds.

The haptic sensation is created by beaming and focussing ultrasounds in a 3D space. This creates an air turbulence that looks like a ghost and you can feel it with your hands.

An image is displayed on a screen and you can touch and feel the texture of that displayed object by hovering your hands on the ghost image.

The researchers hope this might give doctors a better understanding of an MRI radiography by letting them actually touch the virtual creation of the rogan scanned.

They also foresees the device as a way to let people touch a museum masterpiece without the risk of ruining it and to provide a way to actually touch an hologram...

The line separating bits and atoms is getting thinner and thinner....