The tangled web of messages 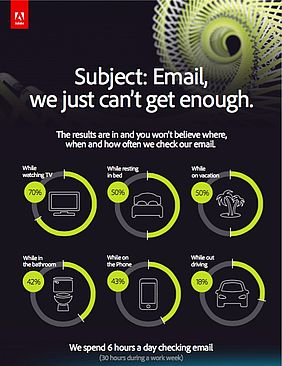 eMails tracking can tell a lot about ourselves. We are using emails in many situations. Credit: The modern team

I have 3 email accounts. This one is the one I use for leisure and it is, in a way, a bit scary... It looks like I am looking (sending) at mails most of the day, including night-time.

In 2015, 205 billions emails were sent/received per day on average (sometimes I have the feeling of getting most of them) and this number is estimated to grow by 3% per year over the next 5 years leading to 246 billion emails per day by the end of this decade. There are 2.6 billion people using emails today and this number is expected to grow to 2.9 billion by 2019, which means that we will move from an average of 78 mails to 84 mails per day. In the US, I only have the numbers for 2009, a eons ago in Internet time, there were an estimated 14.4 trillion emails exchanged versus 177 billion snail mail (this latter number is still basically the same in 2015 according to the US Postal Service). This means that emails outnumbered in 2009 snail mail 81 to 1. My bet is that this disproportion has increased further.

The number of Whatsapp messages is lower, some 30 billion per day, but it is growing at a faster pace.

Have you ever thought that an email is a sensor providing quite a bit of information about you? It can tell a receiver where you were when you sent it, the time you sent it and the "history" of that mail.... (be careful when you "forward" a message).

Of course, Google, Microsoft and other mail providers can tell much more (at least in principle, I do not know if they do any analyses, but I would be more surprise if they don't... than if they do) since they could trace all your mails and derive patterns, understand your social network and much more.

I am not aware of a tool that I could use to create a map of my mails, messages, deriving information on my (implicit) social network. It shouldn't be tricky to develop one.
There are tools like GMail Meter that provide quite a bit of statistical information (how many mail you sent, received, the average time to answer a mail....) but they do not provide any correlation among mails.

This is an area where I feel we can expect quite a bit of progress....