The spinach plant is calling me 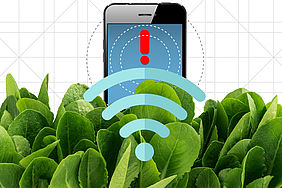 By embedding spinach leaves with carbon nanotubes, MIT engineers have transformed spinach plants into sensors that can detect explosives and wirelessly relay that information to a handheld device similar to a smartphone. Credit: Christine Daniloff/MIT

Researchers at MIT have managed to morph spinach plants into sensors, able to detect a variety of substances.  They did this by embedding carbon nanotubes into spinach leaves creating a hybrid electronic systems they call “plant nanobionics”.

In an experiment the researchers have demonstrated the capability of detecting traces of explosive that contaminated the soil.  By changing the carbon nanotube structures it is possible to detect different kinds of molecules.

You can take a look at the video clip for more information and read the paper they published on Nature.

What I find intriguing is the growing capability of researchers to create hybrids, mixing technology with biology and reinforcing both. The same team of researchers demonstrated in 2014 the capability to improve the photosynthesis process in leaves by adding nanoparticles that augmented the conversion of light energy into chemical energy.

This time they have re-engineered spinach plants to detect nitroaromatic compounds (components of explosives) hinting at the possibility of using plants, any kind of plants, to act as sensors, not just to detect special molecules but just to monitor the environment, for pollution and for the first signs of drought.
By having the leaves emitting infrared light they have also showed a way to have the plant communicating information, in their experiment to a infrared camera connected to a Raspberry Pi.

In the next decade we are going to discover that our environment is interacting with us, more and more, and it is also becoming aware. This is what creates distributed intelligence and we’ll see cities getting smarter as their components will become more and more interactive and aware.