The Saga of Research vs Innovation - VII 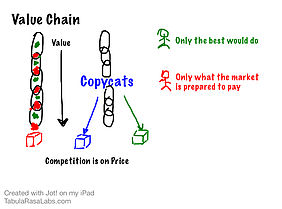 7. The concept of release

In the previous post I noticed that innovation displaces players in the marketplace. Since the amount of money available is finite the decision from a customer (at the end of the value chain or in the value chain) to spend part of the money on a given product/service automatically subtract that money from other potential purchases.

We should also take notice at what happens when innovation is introduced in a competitive marketplace. Pretty soon other players being affected by the innovation in terms of market loss will start to take countermeasures and will try to imitate the innovation or to create even further innovation to displace the previous one.

In most cases the end result is that several players will be able to match the value of the innovation and therefore the competition will shift to price. This creates a fall down effect that shifts the benefits down the value chain till the end resulting in a price decrease for the end customer.

Hence, any innovation in the value chain in a competitive market will lose its competitive value for the innovators (because of copycats) and create value (in terms of decreased price) to the end customer.

At this point the margin gain created in the first place disappears and the company is forced to innovate once more to retain its competitive advantage.

Innovating is not easy, and radical innovation is even more difficult. Linear innovation, on the other hand, is easier and we see this happening on the market with subsequent releases of new product versions aiming at maintaining the competitive edge and therefore higher margins.

Whilst a researcher aims at the best possibile result, innovators aim at a result that is sufficient to steer the market to one’s product or service. A new feature might already be feasible, but it is saved for a new version.

Take the example of the first iPad. Its chassis had the space engineered to embed a digital camera but the innovators (Apple) decision was to release the first iPad without the camera saving it for future release (it showed up on iPad2). That gave customers a reason to buy the new release and also helped to increase the margins, avoiding the cost of the camera.

Would have the customers loved a camera on the first iPad? For sure! Would Apple have sold more iPad had it embedded a camera? NO (or not enough to offset the lower margins, or the decreased appeal because of the higher price tag).

Would have a researcher embed a camera in his prototype? You bet!

Given the abundance of technology, Steve Jobs once said that the trickiest part in creating a product is to decide what feature NOT to include!

I should also notice that in some cases, particularly in academia research, the concept of release exists, although in a different form. Since a KPI for academia is the number of papers published and referenced, there is a tendency of writing several papers on a research result fragmenting it in pieces that can be worth publishing… It is not actually the release concept but it is pretty close and it is motivated by the same “market” forces: to increase sales.