The Saga of Research vs Innovation - IX 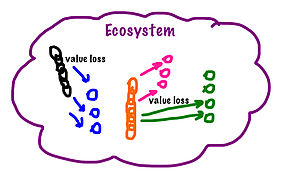 a tremendous increase in the number of value chains, that generated an explosion in the offer

a looser connection between suppliers and providers

This has faded away the usual economic structure to the point that someone has started to talk about ecosystems as opposed to value chain.

Indeed, one of the basic tenet of a value chain, the existence of a contractual obligation between supplier and consumer has faded away. The concepts of best effort, beta release, no backward compliance, free to use ….have made the headlines.

Today much innovation, not all of it but a significant amount of it, occurs in a scattered landscape that in a way is providing a strong bridge between research and innovation.

Indeed, concepts like best efforts, beta release, no backward compliance are closer to a researcher heart than to industrial innovators. And this is creating havoc in the market place and in the economic structure.

The mushrooming of applications like Viber, WhatsApp, Jot, captures the marketplace and changes the economic landscape not because they are diverting resources to their coffers but because they are fulfilling needs that before required investment of cash. They are on the one hand increasing the perceived value of the landscape for the end user (but also for intermediate players in a value chain) and on the other hand destroying value (and therefore decreasing revenues) to those players that were previously fulfilling market needs by selling products and services.

Telecom Operators are losing billions in revenues because of Skype, Viber, WhatsApp and this loss does not correspond to a shift of revenue to those companies.

What happens is that this loss fuels more demand for smartphones that can support those “free apps” and by freeing "money" also it increases the well being of users that can use that money on different products and services.

It also creates a culture of “free” that some claim is not just disruptive but eventually will lead to a collapse of the whole marketplace.

I don’t think this is the case, although it is absolutely true that big guns are suffering, and will be suffering even more, from this shift from value chains to ecosystems (yes, I said before that we still have “value chains”, even when we talk of ecosystem, but the point is about the rules governing the relations of players in the marketplace).

The root cause of this shift from a few value chains delivering limited offer to a multitude of value chains loosely coupled one another, that is ecosystem, multiplying the offer is the dramatic decrease in transaction cost. This makes it possibile to a variety of players, including single individuals, to create an offer and to reach a marketplace.

And the decrease of transaction cost is the direct consequence of technology evolution, connectivity and virtualisation.