The magic of THz 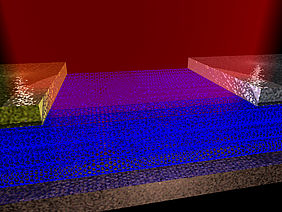 Electromagnetic fields vibrate and depending on the frequency of this vibration they show different characteristics. Notice that I am using vibration is a very loose sense: an electromagnetic field does not require a medium like a sound, it just changes its amplitude over time.

We are very familiar with electromagnetic fields in the MHz and (low)GHz spectrum. In these ranges we find the ones used for radio and television signals and the ones used for our cell phones. As frequency increases we enter into the domain of optics and we call it "light". That happens when we reach the hundreds of THz (red light is around 400 THz, violet light is in the 780THz range, although normally these spectrum fields are measured in nm rather than in Hz, but it is the same, just divide by the speed of light).

There is, however, a very interesting area sandwiched between the GHz and the hundreds of THz that has interesting properties but that it is difficult to manipulate: the THz range.  In this range an electromagnetic field can partially penetrate through objects (as it is the case of GHz fields) and can loosely interact with the material (as it is the case of light).  This provides a very good tool to explore the "inside" of objects. Unfortunately it is not easy to capture these fields, a normal antenna (like the one in your cell phone) nor a photo-diode (like the ones used to intercept light).

Well, now a team of scientists at Sandia National Laboratory in cooperation with teams at Rice and Tokyo University have discovered that using carbon nanotubes it is possible to detect fields in the THz range.

The problem in the THz range is that the photonics energy associated to the field is too low for detection by normal detectors. Carbon nanotubes thin film are extremely good in absorbing photons and converting them into an electronic current (they are often considered the "blackest material in the world" which means they absorb all the visible light spectrum).

What the researchers did is to mix into a thin film metallic nanotubes and semiconducting nanotubes, the firmer are very good in intercepting THz fields and the latter in generating an electrical current.

I bet they will also become a form to generate data thus enriching our knowledge of the environment and providing more bits to big Data Analytics...