The future of television - Part I - The medium is the message

Television has been the most ubiquitous electronic devices till few years ago when the cell phone became number 1. It has evolved and will keep evolving, possibly morphing into a wearable or even, in the long term, becoming embedded in humans 2.0. 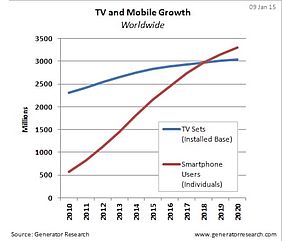 Television is probably the artefact that has had more influence to people and peoples, it is the one that has got the highest penetration before the era of the cell phone. In 2018 it is forecasted we will have more smartphones than television sets in the world, the crossing point being 3 billion.

In a way, doomsayers predicting the disappearance of television by the second decade of this century are being proved wrong. Television is reinventing itself and goes on stronger than ever. Although the classic idea of television set changes, getting morphed into a variety of different screens much smaller and much larger than the television we were used to 20 years ago, before the advent of smart phones and flat screens, television programs are still ruling.

Content that represented 100% of the offer twenty years ago is being complemented by new content that in terms of volume, and more slowly in fruition, is taking the upper hand. This varies depending on the age groups with youngsters shifting more rapidly to different types of screens than elderly (33% of content in the age range 18-34 is viewed on screen different than a television screen). For elderly the classic television is by far the first source of entertainment and information. Not so for the younger generation.

Youtube is ranked first (in US) followed by Netflix with cable satellite coming up third, closely followed by Facebook. Interestingly, 67% of youngsters in US states declare they could not live without YouTube, but just 36% couldn’t live without cable/satellite television (read would be very upset to live without them).

The changes in behaviour are driven by two factors: the different devices providing access to content (the medium is the message has been proven correct!) and the explosion of content offer.

Personally, I would add to the McLuhan statement also the element of “space”, that is where the message consumption take place.

Hence, to stimulate a reflection on the future of Television beyond Television I feel it is appropriate to take a brief look at the evolution of technology and the implication this evolution has on the medium, the place where consumption can happen, the way consumption happens (the degree of interaction) and on the content production and delivery value chain.