The Future of Jobs: Bacteria programmers 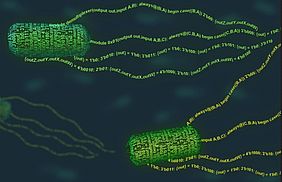 MIT biological engineers have devised a programming language that can be used to give new functions to E. coli bacteria. Credit image: Janet Iwasa

In the previous post on Future of Jobs I discussed the possibility to program Smart Dust. What about programming living cells?

Researchers have made significant progress in the understanding of genes and have become capable of altering the condones sequences. The use of CRISPR has become commonplace in several labs and this is allowing the re-programming of genes to manufacture specific proteins.

Now researchers have moved a step forward. At MIT have created, early 2016, a programming language for living cells.  With it you can program a specific function you would like a bacteria to have, like detecting a certain substance in its environment or manufacturing a certain protein. The "compiler" translates your program in sequences of condones (a strand of DNA) that have to be manufactured and inserted into a bacteria to have it run.

It is like saying that the bacteria is the computer and you are creating a program (a DNA strand) to ru on that computer.

As I mentioned scientists already re-program bacterias but the availability of this programming language makes their work so much easier.

Mind you, we are at the time of "assembler", what we were 50 years ago, but it is already a significant step forward (like the one I experienced when I moved from programming in 0s and 1s to program in Assembler. Then, for me came Fortrand, Cobol, and the C and C++....Other, younger programmers, skipped the coding in bits, and even in Assembler and moved on to Prolog, Java....

Well, something similar is going to happen with bacteria. In the next decade more powerful, and function oriented, programming languages for bacteria, and other cells, will become available and along with them a broad range of applications. In between, we will see a new breed of programmers on strong demand.

Again, as for programming smart dust, the slate of knowledge required will be broad. Biology, complex systems, chemistry and engineering will be the stepping stones for these new programmers. Ethical issues will have to be faced since they will be tweaking with life itself and hacking will have to be taken quite seriously...