The future of Jobs - A new breed of workers 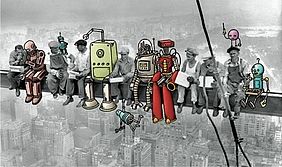 A new breed of workers is coming to the fore, mingling with humans. Credit: Emery Reddy 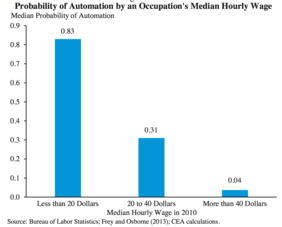 Automation is affecting more and more jobs, in particular those that are less paid. Credit: Bureau of Labor Statistics. Frey and Osborne (2013) CEA data

A quite famous photo was photoshopped to outline a future where people and robots will be working together. We have been “using” robots for several decades, over time they became more and more sophisticated and have moved from being tools into become a replacement for workers. The next step is to become workers among workers, collaborating as a team and learning from one another. Baxter is possibly the version 0.5 of this evolution.
This human-robot collaboration will change significantly the perception of work in the coming years.

A very interesting report published in February 2016, Economic Report to the President (of the USA), outlines the impact of automation (pg. 236 and following ones) resulting from technology evolution and specifically robotics in the work market.
Whilst in the past automation was very much capital intensive and affected mostly big production plants (and companies) in the coming years automation will be affecting many working places, with the highest impact on low wages workers.  According to the report (data analysed by the Bureau of Statistics based on CEA data) 83% of jobs below a 20$ pay (per hour) in the US are likely to be taken over by automation, whilst this percentage decreases to 31% for jobs paid 20 to 40$ per hour and plummet to 4% for jobs getting over 40$ per hour (salary figures based in 2010 in US).

In the next decade, this is my pick, automation will become affecting more and more creative jobs (those that usually harvest the highest pay).

However, as robots take over a significant part of the production work we will likely see a growing interaction with them. Some jobs like "decorator" (painting the walls in your home) are extremely difficult to automate.  Yes, one can envisage in twenty years time a drone taking up the painter job, but who is taking care of moving the furniture, the drapes... out of the way (the cat can take care of itself...). Yet, once we will reach that point it will likely be through the cooperation of the furniture, and the other home appliances/objects, with the robot workers of which the drone will just be one of them, others will take care of moving the furniture out of the way for those pieces that cannot move themselves.

I know it may sound like science fiction, and may be it is, not from a technological point of view (all of that will surely become technology feasible by the end of the next decade) but from an economic point of view (it would cost too much to do the painting in this way). However, if you look back twenty years many activities that are taken for granted today (like taking that selfie, or monitoring your daily activity....) would have seemed science fiction at that time.

As in any other field evolution is not happening all of a sudden. It starts in a few niches and then it permeates larger and larger ones to the point of becoming invisible.

This is what is going to happen, I am willing to bet on this, to self driving cars. We will see an increased automation in driving to the point, in 20 years may be, when it would just seem difficult to imagine a time when one would actually had to drive a vehicle.

And car/vehicle automation once completed will have replaced millions and millions of jobs...