The donkey hat is evolving ... 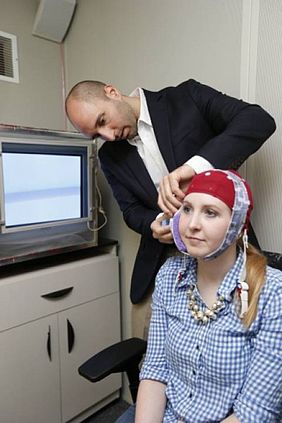 Robert Reinhart applies the electrical stimulus to subject Laura McClenahan. After 20 minutes the headband is removed and the EEG cap will capture readings of her brain as she executes the learning task. Credit: John Russell / Vanderbilt niversity)

Not sure if this heading makes any sense to you... When I went at the primary school (that was eons ago) and I failed a test sometimes the teacher would place a "donkey hat" on me. The hat was a paper cone with a writing on it saying "Somaro", that is donkey in Italian. Apparently donkeys, at least in Italy, are ignorant, and so was I if I failed my tests.

No more donkey hats today in Italian school as far as I can tell from my grown up kids but the news I read on the work of researchers at Vanderbilt made me remember those times wearing a donkey hat!

They applied a 1.5mA direct current by placing two electrodes on the skull, as shown in the photo, for 20 minutes to volunteers that reported only a minor tingling sensation at the beginning of the stimulation. The researchers observed the electrical signals through an electroencephalogram throughout the stimulation, during which the volunteer was asked to perform certain actions. When we do something wrong, and realise it, there is a specific spike in our brain. What the researchers observed was that such as spike becomes bigger, almost twice as big, when the brain is stimulated with the current flowing in one direction and becomes smaller if the current flows in the other direction.

The volunteer didn't get any smarter during the test (or just marginally smarter or dumber but in a percentage that cannot be considered as having any significance). However, after the 20 minutes stimulation, the volunteers who had the current flowing in the "right" direction performed better than normal, for the subsequent five hours (whilst those stimulated in the "wrong" way performed worse).

The increase in learning capabilities induced by this electrical stimulation was better than the one that can be obtained by any known drugs. This opens the door to a better understanding of some brain processes and can provide another tool to improve, or cure, some of them.

So, back to the heading. May be my grand-grand daughter will be wearing an evolved donkey hat in the next decade to help her better learning her drills!