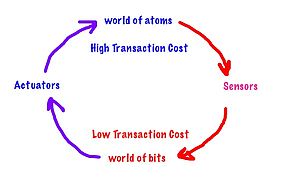 Moving atoms around is much more difficult, and more costly, than moving bits. 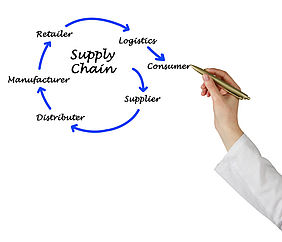 The supply chain is one of the most sophisticated industrial processes existing and it is likely to keep evolving to reach the end customer as products become more and more customised and a blend of software and hardware manufactured/provided by different parties. Image credit: Irisnetlab

Atoms area heavy, bits are light… Just out of curiosity an atom weigh some 10-22 grams and a single bit some … 10-22 grams. Amazing, isn’t it? The fact is that whenever and whatever you do with atoms you are actually working with billions and billions of them (a single human cell contains some 1,000,000 billions atoms).
However, weigh is just one aspect. The most relevant ones are the economics in the transformation of bits versus the economics of the transformation of atoms. And here it is clear that working on atoms is much more expensive than working on bits.

Higher cost (such as big mills in steel manufacturing) leads to industry concentration, lower cost opens up the field to many more players.

The fact that the world of bits has, in general, much lower transaction cost has resulted in a variety of players entering the market, as we can see.
In turns, and this gets interesting, each of this players is there to provide a transformation of some sort, and we have just seen that these transformations are creating the economic value.

A data economy is much more vibrant, it has many players, it is in constant flux and change.

This does not mean that in a data economy there aren’t big players, actually there are but these are the result of what is known as the economics of networks: a network value grows with the square of the number of its nodes. In other terms: those that can aggregate more participants (both sellers and buyers) tend to grow over time killing those that are lagging behind and effectively placing a barrier to the entry of new players.  One can see this looking at on line travel agency, like Expedia and Booking, but at the same time the low transaction cost allows other players to address the same space from a different perspective, like TripAdvisor, thus getting traction on the market and rapidly aggregating a market through the network effect.

Other examples of newcomers that can move from upstart to big presence in the world of bits are Airbnb and Uber, different phenomena both sharing the fact that their rise was made possible by the very low transaction cost offered by the world of bits.