The data economy: the whys II - From Bits to Atoms 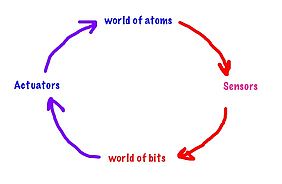 Bits can be transformed into atoms, as in 3D printing, or can activate transformation on objects, like controlling a car. 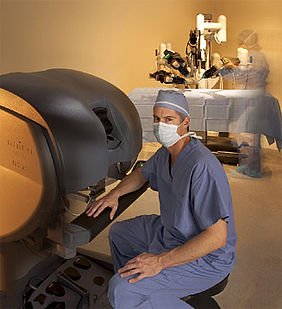 A DaVinci surgical robot has 3 operating arms that can be equipped with a variety of surgical instruments. The surgeons control the robots from a workstation. Credit: Intuitive Surgical Inc.

Bits are a convenient, neutral, way to represent a variety of different entities, be it a sound, a quantity, and image, a process. A bit is a bit, per sé it has no meaning whatsoever: 01000001 is a string of 8 bits that happens to be the code for the letter A in ASCII, but it may well represent the number 65 in binary code or it might represent a quite light shade of grey in a photo. Depending on the way you are “looking” at them they might mean one thing or another. They don’t have an autonomous life, actually, they come to life if you have a decoder able to interpret a coded meaning.

This same decoder can transform that meaning into an action that acts on the physical world, the world of atoms. In this way we can say that bits affect atoms or are transformed into atoms, as it is the case when we use a virtual representation of an object to create that physical object using a 3D printer.

These few concepts are important when we want to appreciate the “data economy”. Bits are the immediate representation of data but unless we are dealing with a representation of numbers, like 1-2-3, where the coding is straightforward, 001-010-011, the bits have to be interpreted by a software to release their meaning. And the software is as important as the bits. Hence the data economy is not just about bits (data) but also about their interpretation (software).

The “economy” part, i.e. the value, is connected to what you can do with those data, the value resulting from their manipulation and transformation (e.g. the printing of an object, or the visualization of a trend) minus the cost of such manipulation.

Hence the transformation process plays a crucial part in the definition of the “data economy”.

Technology has made significant progress in making ever more sophisticated transformation possible.

3D printing is a clear point in case, where bits describe a virtual object that is converted into a physical one by a software driving a 3D printer. Notice that such a software needs to decode the meaning of the bits (understand the virtual representation), transform this understanding into a sequence of commands for the 3D printer (that prints without knowing what it is being printed!) and also should be aware of the characteristics of the 3D printer and of the feeding inks used (plastic wire, metallic beads …) to provide the appropriate sequence of orders. AS you can see, even in the case of 3D printing the transformation of bits into atoms is not that straightforward.

Robotic manufacturing is another, more complex, example of transformation of bits into atoms.
Here, often, the robot has an autonomous intelligence that understands what it is supposed to do (and this is the result of the first transformation process from bit to bits that are closer to the atoms…) and adapt the sequence of orders received to reach the goal. Think about a robo-surgeon like Leonardo.  The amount of skill, practical intelligence embedded in its computers is staggering. The surgeon is guiding the robots through a data set representing the patient body (part of it) and the kind of issues that need to be fixed. The surgeon operates on a virtual field, a screen, using virtual scalpels, scissors and sewing needles. The virtual screen provides an image that is a mix of real patient images and images created by a computer as result of a variety of scanning techniques. The manipulation of instruments by the surgeon at the control station is used by Leonardo to understand what is the goal of the surgeon and it gets translated in different sets of actions, performed with different tools by its robotic arms.

The way bits are connected to atoms is crucial and the transformation process is what actually generates value.

Notice that this applies generally: the PB of data contained in the Google data centers are transformed into value by Google search algorithms. The transformation is the crucial part in the generation of value, even though in this case it is not a transformation of bits into atoms but of bits into "perceivable" bits.

We should keep this in mind as we are discussing the “data economy”.