The data economy: the whys I - digitalisation 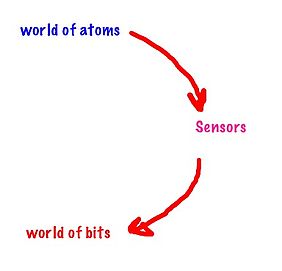 Various technologies have been developed in the last 50 years to convert in a meaningful way atoms into bits. 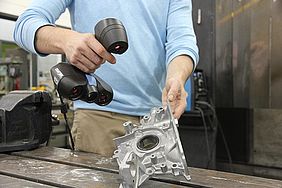 Since at EIT Digital we are seriously considering to play a big role into the coming Data Economy, and this will likely be our "leit motif" over the coming 3 years I have started to share some thoughts on this. And, as you have seen, I started with an application area, Health Care, because our feeling is that the data economy will be driven by application areas, rather than be imposed in a top down fashion. Moving from application areas guarantees immediate returns.  And, I choose health care specifically because of the emotional relevance it has (you got plenty of data in moving containers around the world but that is much less catchy, isn't it?).

What happened in the last 50 years as computers percolated every path of business and life was a drive towards digitalization. In principle anything can be represented using bits, text, images, sound, urban plans and manufacturing processes.

Transforming the real world into a meaningful representation based of bit has been straightforward in certain areas (math, as an example) and trickier in others (like thought processes), so tricky in fact that we have not achieved a complete digitalization of the world and of ourselves.

Of course, one should first define what is meant by “meaningful”; my definition is the creation of a digital entity that is equivalent, under certain conditions, to the physical one. As an example a digital plane is not like a real plane but if the aim is to simulate its characteristics in flight situations we can say that the two are equivalent, likewise if the goal is to manufacture the plane we can say that the digital equivalent is an effective blueprint that lets us build the physical one.

In health care the digitalization has proved its usefulness in many many areas: detection and recording of the inner structure of our body (radiography, fMRI,…), modeling of prosthetics for manufacturing (e.g. tooth implants), design of new drugs, analyses of epidemics, sequentialization of the genome and so on.

What is crucial is the existence of a correspondence between the bits, the digital copy, and some aspects of the physical reality.

Look at the drawing. We have the world of atoms and by applying a variety of instruments, that we can call for uniformity “sensors” we “extract” a sort of digital essence that can live in the world of bits. This has been driving the evolution in the last fifty years and the progress was made possible by the creation of ever more sophisticated “sensors” along with ever more sophisticated software that ensures the correspondence, i.e. that the understanding derived at the bit level applies to the atom level.

This has not been a minor endeavor and although it has resulted in an amazing wealth of knowledge it has also created many issues.  Even in the math space, a space where bits seem even better at home than in a physical world (a line has just one dimension but in the physical world it has to have two, actually three, dimensions whilst in the bit space it can exist in one dimension only since bits are dimension-less and what they represent is depending on the software using them), there have been, and there still are, argument about the validity of a theorem proven in the bit world by a computer. A point in case is the demonstration of the sufficiency of four colors to cover a surface in such a way that a same color does not appear juxtaposed and separated by a line.  This theorem has been solved through computer processing requiring such lengthy steps that it is impossible “to run it” in our brain, hence a number of mathematicians are not accepting it.

However, the transformation of atoms into bits has led to such successful results that it has become ubiquitous and efforts has continued through these years to digitalize everything.