The data economy: The future of health care is data based - VI 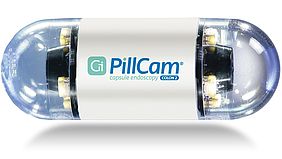 A swallowable, disposable, digital camera to monitor the gastro intestinal "tube". It embeds a LED to illuminate the area.The first one was used back in 2001. As of end 2014 2.5 millions have been used. Credit: Given Imaging

Clearly there would be very little point in harvesting and analysing data if that wouldn't lead to a prescription and action of some sort.

Progresses have been many and it is possibly the area of health care where we can expect most technology evolution in the coming years. And, not surprisingly, it is an area fraught with big ethical issue when the potential end is hacking the human operating system, our genome.

As better diagnostic tools become available, and data analytics are part of that, there is the need to have better tool to deliver the cure, be it carrying specialised drugs to target cancer cells, removing micro clots or building a scaffolding in a specific location to stimulate cells growth up to delivering DNA patches to fix a problem in a few cells.

Notice that by focussing on small targets the doses are way lower than what we have to use today. Chemotherapy in the future will use minuscule dosage, although from the point of view of the receiving cells it will be way higher than today. Side effects, as result, will be minimal. As an example hair loss is a side effect of chemotherapy because the drugs kill rapidly growing cells, that is cancer cells but also cells in the hair follicle. Having the possibility to deliver the drug to the cancerous cells only will avoid this issue, and several others...

In the past months and years I posted on advances in micro-robots designed to carry drugs to specific places, powered in many different (and ingenious) ways, like moving in the stomach by using HCl as a propeller, or moving through the blood vessels pushed by a magnetic field controlled from outside of the body, attracted, and bound on the target cells by specific molecules.  In the figure the image of a mini pill used since 2001 to inspect the gastrointestinal tract that might be used in the future (newer version of course) as a beacon to have micro robots perform mini-surgery on cancerous cells. Read the article "Micro-bots on a fantastic voyage" on Spectrum to know more about the challenges and the expected evolutions.