The data economy is coming, hand in hand with cultural change 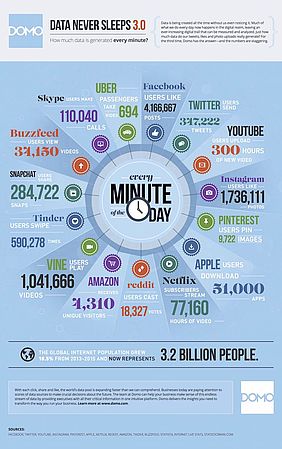 The big data flood. It is not just "much more", it is about what it will change, and how we can steer the change. Credit: Domo

We moved from the culture of atoms to the one of bits, and now we are moving towards an economy and culture of data. We live our life under a continuous avalanche of bits because technology over the last 50 years have make transformation of atoms into bit easy, cheap and seamless. Most importantly, most of the time we are not even aware of this bits overflow.

Taking a picture of the Milan Duomo (Cathedral) with a smartphone is an easy example of a monument transformed into bit. Sensors, in this case the digital camera sensor, are the most common “utilities” making this transformation possible.

There are also ways to convert bits into atoms; taking the previous example when you print the digital photo of the Milan Duomo on paper you are actually converting bits into atoms, although different ones from the one that originated the digital “copy”.

3D printers are devices that also transform atoms into bits, they have become more visible in the last years as they moved from very specialized application areas (and from being quite expensive) to consumer areas (and consumer prices). Automotive companies have been using 3D printers for many years now and today they are used to manufacture components that would quite difficult, sometimes impossible, to manufacture in the usual way.

Wuxi, in China, has grown amazingly fast from a few hundred thousands people to over 6.5 million in just 8 years.  This population explosion was the result of the China central government decision to move to the city all the scientific, technological and industrial know-how/assets related to the world of sensors, or in other words to the world of Internet of Things (IoT).

Each of us, in our smartphone for sure has a few sensors (a smartphone contains some 14 different kind of sensors!) that were manufacture in Wuxi, our cars have plenty of them.

In numerical terms we are talking about billions of “things” that are already part of our gadgets (by the end of 2015 there will be close to 2 billion smartphones used, which means some 30 billion sensors contributed to the IoT by smartphones only). Overall a trillion computationally enable things will populate the world in 2020 although just a fraction of them will be directly connected to the Internet (50 billions according to Cisco and Ericsson).

The volume and variety of data “created” by sensors (and “things” indirectly, such as data on the position of a cell phone created by a base station by analyzing the received power of a phone wireless transmission) are at the root of the “economy of data”.

To better understand this evolution, or shift, one has to take into account that the economy of bits, differently from the economy of atoms, enable unlimited duplication. If I give you my atom, I no longer have it. On the other hand I can duplicate a bit I have, give it to you, and we both have a bit.

In the past I could duplicate a music or movie cartridge but it was not possible to do that over and over since at any duplication the quality degraded to the point that the cartridge was no longer usable. Now, with digital music and digital movies I can keep duplicating with no quality degradation, actually there is no way to separate the original from the copies.

This has transformed music into a commodity. I buy a song because it is faster to buy than to search and copy, although youngsters may pretend that copying is a “right”, one should not pay for bits. Different cultures that are now clashing on the wave of a dramatic change: the data economy, a different beast from the bit economy.

There are several examples of a paradigm change. Take health care. In Italy it amounts to 7% of GDP, a 100+billion € per year and increasing since it helps people getting older and this increases the need for health care in a virtuous or vicious circle depending on your point of view. The data economy might increase health care efficiency without increasing its cost.

The airplane black box is used to discover errors and malfunctions when something goes wrong, but (most of) those same data are used to decrease the amount of fuel used. An algorithm transform the airplane into a “glider” through complex data collection and analyses.

In health care we are moving in the same direction. Thanks to the sequencing of the genome, at a cost that will go down to 100€ per sequencing in the next decade, it will become possible to create customised drugs and probably to anticipate problems and fix them at a much lower cost than curing them once they become manifest.

The genome sequencing can be compared to todays blood analyses in terms of cost and time, with the difference that it only need to be done once. All newborn in the next decade will be tagged with their genome (in the web) and a customized health care protocol will be in place significantly decreasing the life health care cost.

Information about “us” is ever more available. The Apple watch on your wrist can generate raw data that once correlated give rise to information about you including your health (it can measure, among other things, the oxygenation level of your blood). Clearly a smart watch is not as accurate as a hospital examination would be but it is always on your wrist and can make up its lesser accuracy with the continuous monitoring, resulting in a much better digital picture of your health. Welcome to proactive medicine.

Being monitored 24 h a day may lead to anxiety, but it might turn out to be very useful. We already have a mirror (produced by Philips) you can hang in your bathroom with an embedded camera and software to check your face for telltale signs of problems (digital imaging can spot your heart beat, problems in the carotid arteries, and blood pressure). This mirror gets used to your face, learns it and can spot differences. Toilets in Japan can do even more, like going to the hospital every single morning and evening for a check up.

The growing data set is becoming an asset with an amazing value that can be used in a variety of contexts.

Songdu, South Korea, is the first smart city where inhabitants have daily health care data that can be analyzed from remote also through correlation with other people data thus detecting patterns that can be location related.  Like a plane a seamless black box will change the idea of health care.

An experimental program in Minnesota, US, accrue patients data for cross reference to derive information on the effects of drugs and cure protocols. It is like having a continuous on-going medical trial.  By cross referencing patients data researchers at Stanford detected nasty side effects resulting from assumptions of two drugs, prescribed by different doctors for completely different reasons.

The economy of data changes roles and the way we live our life (you can of course feel as if you are always in a hospital or like you are never in a hospital and this will be subjective but will also be cultural).

In the coming 10 years smart cities will see a growing number of self driving cars (starting with assisted driving cars), that will be a game changer for the industry and for our life style and culture (and the two will go hand in hand, one is impossible without the other). In my car, still seated at the steering wheel, I will no longer have “to pay attention”, just be seated and wait to reach my destination.

It is now 15 years that the European Commission launched the research program to slash the number of casualties due to road accidents. An investment of many billions of euros and yet we already have the technologies to cut down to zero (or close to it) the casualties. We could remove speed limits, remove the red lights and replace them with antennas letting cars talk with one another and with the road system. We all understand the need for “the others” to respect speed limits…. but they do not apply to us, since we are such good, sporty, drivers!
Technologies, today’s technologies can solve the technical problems, but not the cultural ones.

EIT Digital has flanked the change of focus from atoms to bits. The blended life studies the interplay of atoms and bits, leading to augmented reality, a 150B € biz in 2020. Applications like Word Lens (now acquired by Google) lets you look at a Japanese menu in a restaurant seeing the menu in your own language, still leaving the images of food that accompanies the list. Only the characters change, adapting to your needs, the rest remains the same in a continuous interaction among atoms and bits.

The data economy is the coming challenge: it will leverage on bits to create semantics that in turn will change the bits and the way we interact with atoms, including the ones making up our bodies.

And… the privacy issues, the ownership issues, the accountability issues are all fuzzy nightmares on the horizon.